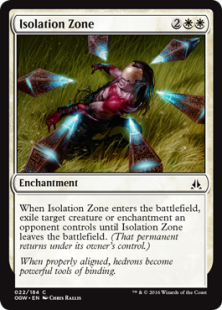 Since you can only target creatures and enchantments, this is a powered down version of cards like Oblivion Ring and Banishing Light.  Despite that drawback, and the extra mana cost, it is still a strong removal spell in the Limited format.  With little to no enchantment removal (unless your opponent sneaks in their own Isolation Zone), expect this to stay in play for a while! 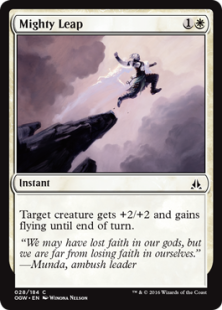 We have seen this card before, but it doesn’t stop it from being an amazing combat trick.  Not only are you able to pump both power and toughness with this card, but being able to shut down a Flying creature can be a huge momentum swing in your favour. 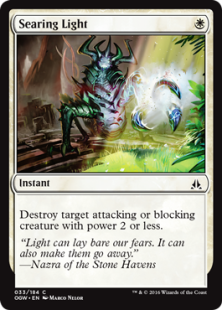 One-mana removal spells are pretty rare in Magic, let alone a common one.  It's true that there is a limitation to what you can target, but early on this can make sure that a pesky 1/4 blocker or an early 2/2 are removed. 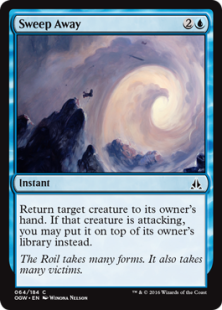 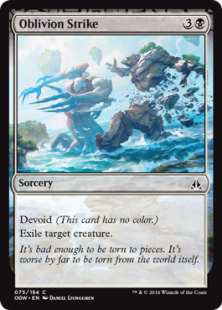 This card provides us one of the most efficient black common removal spells we have seen in a long time. We have seen weaker commons in previous sets that do the same effect or less, yet costing more mana such asDemon’s Grasp, Unholy Hunger, and Flatten.  Throw in the bonus that the creature gets exiled as well, and you should be seeing plenty of this common this upcoming weekend!

Cantrip spells are usually seen in blue, but Expedite is a great card that will replace itself when cast. Being able to add Haste for one mana to any of your new creatures without costing you a card is a huge advantage.  This also helps trigger all your red Prowess creatures. 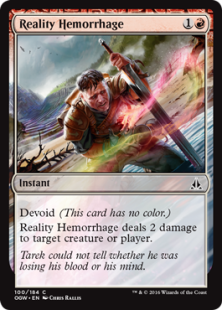 Burn cannot be underestimated in any format and Reality Hemorrhage fills in a void which red has been missing since Wild Slash.   This will allow you to remove some early threats or get in that last two points of damage needed to kill a large Eldrazi or even a player. Since this is a Devoid card, it will come in handy if you have some Devoid synergy in your deck as well. 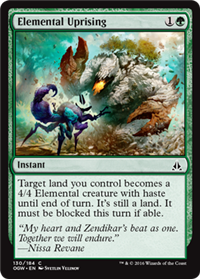 This is another great common that can be used in both your turn and your opponents turn.  During your turn, you can activate one of your existing lands to have a 4/4 Haste creature that can get in some damage.  If you have a used an Awaken spell during an earlier turn, this can make a much larger land creature as well. During your opponents turn, you can use it as a combat trick by making an instant 4/4 blocker out of one of your lands. 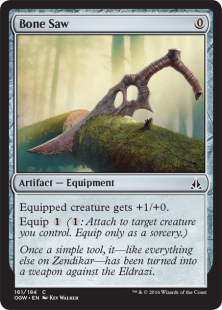 A cheap equipment that will allow you to add some extra power in a cheap way to all your creatures.  But what really makes Bone Saw shine is the fact that it can help you activate any of your Surge cards for 0 mana.  This can allow you to cast Surge cards at a huge discount when playing one against one. 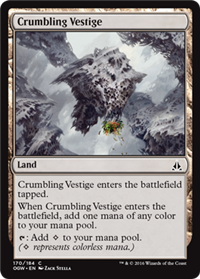 A great utility land that will allow you to run more colourless cards in your deck without taking away from the coloured mana needed to cast the majority of your spells.  Unless you need specifically colourless mana in that turn, the face that this card comes into play battlefield tapped isn’t much of disadvantage.

Thanks again for reading another edition of the Daily Dose of Oath of the Gatewatch and I look forward to seeing you again tomorrow as we talk about the Top 10 Uncommons you want to look out for come Prerelease Weekend!