Daily Dose of Oath of the Gatewatch - Beware the Glare!

Welcome to another edition of the Daily Dose of Oath of the Gatewatch! As more and more preview cards are becoming available for perusing from the new set, the anticipation builds for Prerelease Weekend on January 16th and 17th. With mechanics like Surge and Support there's no better time to play Two-Headed Giant tournaments at your local gaming store!

Today, we will be looking at some promising cards from the new set. Let’s start with Immolating Glare: 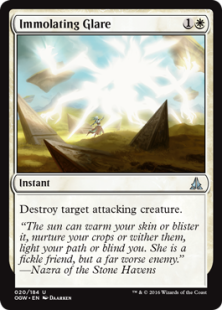 This is a great 2-mana removal spell that could be seeing some play in Standard decks in the near future. In past sets, there have been many cards that have attempted to be like Immolating Glare.

Divine Verdict – Great spell, but costing 4-mana is a little too much.

Celestial Flare – Not only do you need 2-mana, but if they are attacking with more than one creature, you don’t often get to destroy the one you want.

Kill Shot, Rebuke – A card that did the same thing as Immolating Glare, but cost 3-mana.

Puncturing Light, Terashi’s Verdict – 2-mana removal, but only for power 3 or less.

Surge of Righteousness – 2-mana removal, but only against black or red creatures.

This trumps all these cards and should see more than just Limited play!

The next card we will be looking at is a tutor card named Call the Gatewatch: 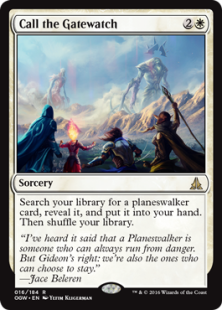 Over the past few years, they have been adding the word Planeswalker to more cards than ever. Cards like Hero’s Downfall, Despise, and Dragonlord Silumgar have taken advantage of the ability to target Planeswalkers. With only one white mana needed, Call the Gatewatch will be a great splash card for many decks allowing you get to all of your favorite Planeswalkers! Using this to guarantee a turn four Gideon, Ally of Zendikar is an especially nice use of this new card. This card is a excellent complement to all of the other tutors for card types they have made over the years.

The next card we will be looking at is a Clone variant with some neat possibilities. Take a look at Eldrazi Mimic:

By far this is the smallest Eldrazi Mimic at 2/1 for 2-mana, but don’t be fooled! This small Eldrazi can do some major damage. Be warned: there will definitely be some turns where you aren’t able to cast any colorless creatures, leaving this as a generic 2/1 creature. Other turns though, you have the chance to - in a way - give your newly cast colorless creature haste. Eldrazi Mimic will copy its power and toughness and attack away for some potentially large damage. Overall though this card will be tough to use as noted by its flavor text, “It is consistently inconsistent.” I couldn’t have worded it any better.

Thanks again for reading another edition of the Daily Dose of Oath of the Gatewatch. It’s great to see some of the fun new cards coming out in the coming weeks and I look forward to talking about more of them with you tomorrow!