Daily Dose of Oath of the Gatewatch – Pure Gold!

Welcome to another edition of the Daily Dose of Oath of the Gatewatch, where we will be once again looking at some of the preview cards for the newest set coming out on January 22nd. Today we will be looking at some cards that are gold, meaning they have a nice gold bolder as they need more than one color of mana to cast them. I can’t them all multi-colour cards as you will soon see. I’ve always been a fan of multi-colour cards. In recent years they have pushed the power level of multi-colour cards compared to cards that only have one color in their casting cost. Cards like Siege Rhino, Geist of Saint Traft, and Loxodon Smiter are just some of my favorites from year’s past.

Let’s take a look at the first card for today which is a variation on one of the classic cards of Magic, Reflector Mage. 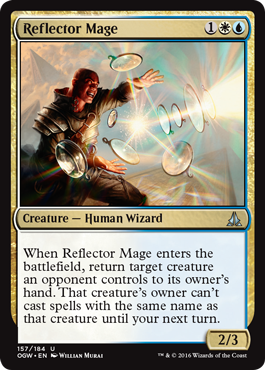 There have been cards like Man-o'-War and Aether Adept that have been blue creatures for 3-mana that return a creature an opponent controls to gain some tempo advantage. Reflector Mage takes this to new heights, by not only bouncing an opponent’s creature, but making it so they aren’t able to cast it in their next turn. Now that is some major tempo. You can see the increase in power due to it costing blue and white to cast for 3-mana compared to the blue only cards. You get the bonus of the bounced card not being to be cast the following turn and you get a 2/3 rather than a 2/2 creaturel.

This is a similar power boost that happened when comparing Oblivion Ring and Detention Sphere. Making Detention Sphere 2-colours allowed you to exile all creatures of the same name.

Now let’s take a look at another new card, Mindmelter. 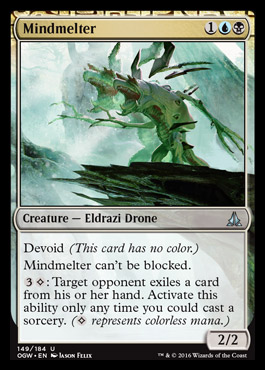 The last cards we will be looking at is another Devoid card. Here is Flayer Drone. 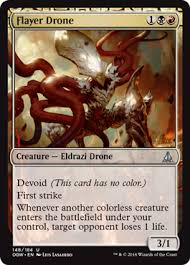 This card has some potential to build up some major damage towards your opponent. If you start to play Devoid cards that add even more Colourless Eldrazi Scion tokens on the battlefield, you can start doing 2 to 3 damage per turn with its ability. Being a 3/1 First Strike creature will also make it harder to block as well. They are starting to make more and more cards that could allow Devoid decks to be something we see more and more of going forward. Only time will tell if colourless will rule the land!

Thanks again for reading another edition of the Daily Dose of Oath of the Gatewatch and I look forward to seeing you again tomorrow for some more preview action!