Daily Dose of Shadows Over Innistrad – I’m Flipping Out Over This Card!

Welcome all to some more Daily Dose of Shadows Over Innistrad, where the preview engine keeps on churning out some more awesome cards! It is less than month away until Shadows Over Innistrad is released on April 8th, and if the cards shown so far are any indication, this will be a set that will have a large impact on the Magic scene.  Since Magic Origins, there has been a storyline that they have been working on in each block and set that started with the origins of the five main Planeswalkers of Gideon, Jace, Liliana, Chandra, and Nissa.  They’ve continued to print more of these same Planeswalkers in the last block, where we’ve seem new iterations of most of them.  I was glad to hear that they not only brought in one current to the story line in Nahiri, the Harbinger, but also a Planeswalker we haven’t seen before. Who is this mystery Planeswalker? Well, here is Arlinn Kord: 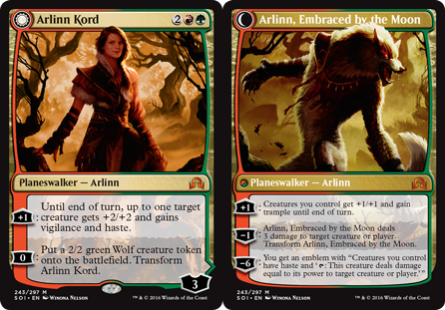 When I see this card, there are two cards that I immediately think Arlinn Kord is a combination of:  Huntmaster of the Fells and Garruk Relentless. She is like Huntmaster of the Fells because of the ability to transform back and forth, produce both a 2/2 Wolf, and deal damage. She is like Garruk Relentless thanks to being a Planeswalker with multiple abilities on both sides of the card.

Arlinn Kord to me is seen as a four ability Planeswalker, with an ultimate that – like most Planeswalkers – won’t be used very often.  She has the ability to protect herself on both sides of the card by either putting a Wolf in play to block or dealing three damage to a creature to take it off the battlefield.  When the board is clear, Arlinn Kord also works very well as an offensive threat.  Being able to get in extra damage on one creature, or to all creatures (when transformed), Arlinn Kord is a threat when above and behind on the board.

This is definitely the type of card that makes me want to play some Naya and throw in Nahiri as well.

Next I’m going to look at a creature we last saw in Magic 2013. The silver fox is back with his badass sword, here is Odric, Lunarch Marshal. 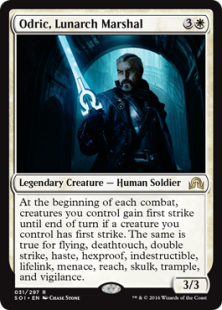 This is a very interesting ability that really makes me wish we had Chromanticore like creature that could work well with it.  Don’t be too discouraged, here are some of the best creatures that will work well to give all of your creatures some cool abilities. If none of your creatures have any cool abilities you can just use Arlinn Kord to give all of your creatures Vigilance, Haste or Trample. I would say the best abilities of the ones listed that you would want all of your creatures to have would be either Flying, Lifelink, Double Strike, or Indestructible. Will be interesting to see if this card will see a lot of play.  Usually cards that are so reliant on others are hard to play with.

I can’t wait to see what is coming next! Thanks so much for reading the Daily Dose and I look forward to seeing you tomorrow with some more new cards and preview action!  Remember to sign up now for a prerelease at your local gaming store to get in on the fun!