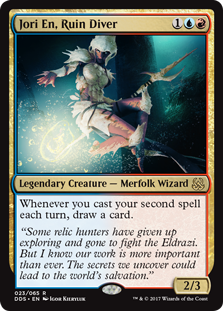 Why aren't you playing her? What, you don't like drawing cards or something? Snap out of it, dear reader, and get the Ruin Diver on your side while she's still a $1 card.

Let's talk a bit more about Jori En, the latest in a long line of draw-based Izzet-coloured commanders. Jori punches in at 2/3, so she's got a decent body for three mana (no power shaming here). For both her colours and her effect, you couldn't ask for better sub-types for tribal synergy than Merfolk and Wizard. Her conditional, but cost free, draw power harkens back to a fish who must surely must be Jori En's trans-planar grandfather, Sygg, River Cutthroat.

What about Sygg? Sygg lets you draw a card if your opponent has lost three or more life at the end of the turn. While this ability can trigger on your opponents turn, you still don't get to draw the card until the end of the turn. An equally specific condition as Jori's, but one that I feel is more difficult, and at a slower speed. Yes, Jori's casting cost is higher by one, and her mana cost is more specific, but I still can't help but look at the two and feel like Jori is the clear winner.

This sample deck list is a quick and dirty (but 100% rotation proof) Bring to Light list that really shows off some of her amazing usefulness.

Mmm, I love the smell of a fresh brew. It smells like mischief, with just a hint of shenanigans. Let's break this deck down a bit, shall we?

Jori En, Ruin Diver – Is of course here for her draw power. With the right mana, casting Bring to Light while she's out basically changes the card text to say 'Play any spell in your deck for free, then draw a card'. Goblin Dark-Dwellers' card text becomes 'Play one of your removal spell from your graveyard for free, then draw a card'. These two cards are already being singled out for their value in decks and articles all over the place, so I'm won't bother lecturing you on them any further

Halimar Tidecaller – is here primarily to recycle Ruinous Path and Planar Outburst, helping make sure the battlefield belongs to us at all times. However, as a delicious bonus, she gives our hefty lineup of man lands flying at the same time. More on that later.

Reflector Mage – Because an empty field means easy damage, and forcing your opponent to wait that extra turn before casting the creature again is just priceless.

Goblin Dark-Dwellers – Can cast almost all of our spells from the graveyard when he comes into play, which is awesome because the only thing better than running four Ruinous Paths is running eight of them.

Sylvan Advocate – A creature that has been called the next Tarmogoyf certainly deserves a spot here. Even if we haven't hit enough land to make him a 4/5, he acts like a lord for our man lands, turning our already impressive creatures into sudden win conditions. A pair of these and a Tidecaller on the field turns even a lowly Shambling Vent into a 6/7 flyer with lifelink. I'm not saying these pumped up lands are what will win you the game every time, but they will certainly help a lot.

Spell wise, our set up is pretty basic, so I won't spend a ton of time on it. All you really need to understand is that Bring to Light tutors and plays any card in our deck, triggers Jori, and is my favourite card in Standard right now. Ruinous Path, Sylvan Scrying, Fiery Impulse, and Flaying Tendrils are all well-known removal spells.

The Pulse of Murasa is a singleton is a personal toolbox choice. For me, I see it as a decent addition recycling power that isn't a terrible draw early, but otherwise is in there to be found with Bring to Light when needed. The low, low casting costs on Sylvan Advocate and Reflector Mage make top decking into it worthwhile in my opinion, because getting +6 life while regaining a 4/5 Vigilance or a 2/3 Bounce-on-a-stick is really not the worst thing to ask for from a top deck.

It also allows for some serious silliness, and  I seriously enjoy silly plays. The epitome of silliness would be using Pulse to fetch a Goblin Dark-Dwellers, casting it, then using the Dwellers to re-cast the Pulse. Twelve life and two cards regained from the graveyard? Sure. Using Pulse on a Halimar Tidecaller, followed by casting the Tidecaller to re-gain Ruinous Path or Planar Cleansing? I'm down with that. And last, but not least, trading a big threat with a Hissing Quagmire, only to bring back to the Quag with a Pulse.

So, what do you think? Does Jori have what it takes to become a Modern staple? How about Bring to Light?

As always, leave your thoughts in the comments section below!