Hey guys, today I’m going to be talking about a couple of the devotion decks I’ve built for Theros standard. Please note that these decks will not include sideboards since I don’t know what the format will be like yet and building a sideboard if you don’t know the meta is useless. 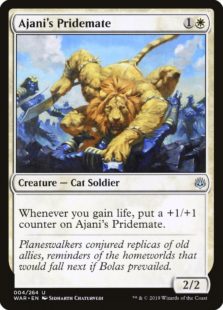 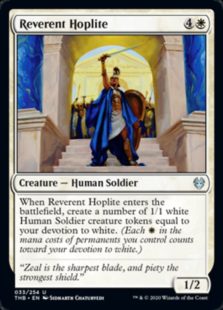 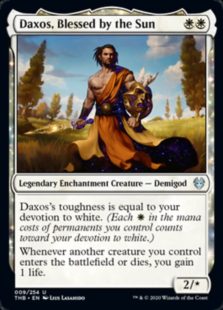 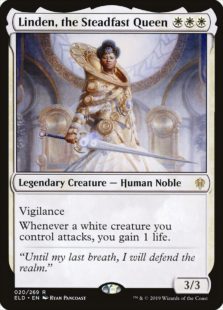 First of all, the heart of the deck: The Pridemates and the Soul Wardens: These are all fairly obvious, 4 of everything. Now the next best cards: Not only does Ajani, Strength of the Pride make Pridemates, it also gains huge amounts of life. It can even be a pretty consistent one-sided board wipe if your opponent doesn’t have ways to deal with your lifegain. Also under strong cards: Reverent Hoplite. This card gives you a few new things. First, in a mainly go tall deck, it allows you to go wide. Second, it gives you a million little creatures, and almost all of your life gain in this deck is directly linked to how many creatures you have.

Now all the rest of the stuff. Linden, Steadfast Queen gives you a big chunk of your needed devotion while also gaining you life 1 life at a time, the best way to gain life when you have a pridemate. Alseid of Life’s Bounty is a way to protect your creatures while also having lifelink. Shadowspear does have abilities that make it easier to kill your opponent’s stuff, but they probably won’t be used. Why this card is in the deck is it gives one of your huge 11/11 pridemates lifelink and trample, probably two of the best abilities you could give them, and it’s only a couple mana as well. Taranika, Tomik, and Gideon are all just cards that are good value-wise and give you some devotion. The rest of the deck is just removal.

One card that I nearly included but didn’t is Arcanist’s Owl. I decided not to just because the value it gives you probably isn’t worth 4 mana. It does have the potential to get you a good card though, you have plenty of good enchantments and artifacts, and 4 devotion is nothing to laugh at. This may be good if you find that you aren’t getting as much devotion as you’d like.

The unfortunate thing about this deck is that it takes a deck that is mostly uncommons and junk-rares and makes it unplayable without a $10 mythic and a $25 mythic. So much for budget.

Blue is far weaker than black and white, but I could still see a blue devotion deck using Thassa, Deep-Dwelling and Thassa’s Oracle to draw the exact right card every turn being good. One problem is that there is a lack of good cards to find. The other problem is that a lot of the good blue cards are flash based, and that deck would require many instants and sorceries. But most of the devotion cards are sorcery speed, so it could be hard to find a balance between the two.

If I’m making a black deck, the number one requirement is that it includes Cauldron Familiar. The main pay-off is Gray Merchant of Asphodel. The two cards that make it easiest to get devotion are Ayara, First of Locthwain and Underworld Dreams. Anyone else seeing a pattern here? All the aforementioned cards do direct damage. 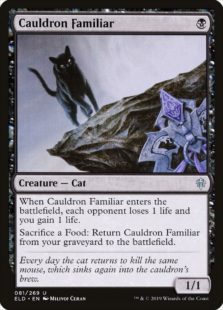 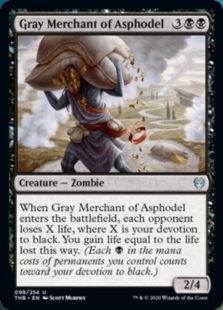 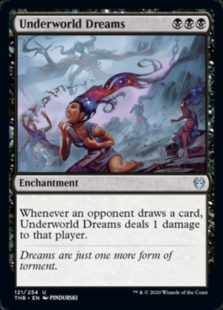 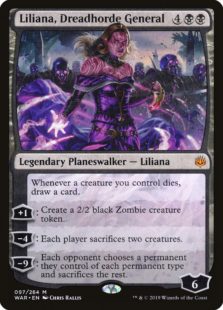 Cauldron Familiar and Witch’s Oven are fairly obvious auto-includes. If you’re not sure why, you really need to look around at the meta. I’m not going to waste any more metaphorical ink on these cards. Gray Merchant of Asphodel is also fairly obvious, the last time it was in standard it dominated; it’s just a great finisher and can kill your opponent flat out. Liliana, Dreadhorde General is the best black bomb so it also is an auto-include. Ayara is good for giving you devotion and is also great with the cat combo. It doubles the ETB effect of the cat and gives you a way to get rid of useless 1/1 creatures for value.

Underworld Dreams gives you devotion and will eventually kill your opponent, the same way cat will. Deathless Knight can come back infinitely if you have the cat or Ayara and can be thrown at your opponent repeatedly. It also gives you a bunch of devotion. Elspeth’s Nightmare isn’t a super good rate for anything it does, but it does a bunch of different small useful things. Unfortunately, it often gives your opponent a chance to get rid of any of the cards you were going to take with the Duress part of it. The rest are good value cards that you can probably figure out on your own.

I didn’t add Treacherous Blessing because, while it draws me so many cards, it could theoretically also kill me because I have no way to get rid of it. I decided that while 3 cards for 3 mana is a good rate, 3 cards for a game loss isn’t.

When Gray Merchant came out, I didn’t have much faith in it, but this deck has potential.

These colours both have good Gods, but they have no other payoffs. Gods can become creatures easily enough without a devotion deck built around them.

Anyway, thanks for reading. What did I miss? Do either red or green actually have potential? Do you have a cool mono-blue devotion deck? Let me know in the comments.