Now that Modern Masters 2017 has dropped and is being drafted feverishly by all players from Modern and Limited junkies to us Commander players, just about every meta is about to see an influx of very good cards from Linvalas to Snapcaster Mages. So with these greater creatures, comes greater threats in our games which means we have to get rid of them – quickly and efficiently. Now I realize your budget may have been a bit broken by purchasing that new Liliana you've been waiting for, so I've got just the list of removal spells that won't break your bank, but can still tangle with anything your opponents are throwing down. 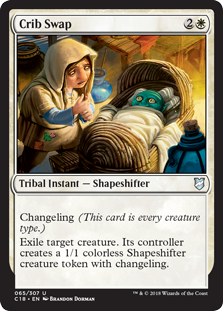 I'm calling it now, White is the best removal colour in Commander. It handles anything you could want, creatures, artifacts, enchantments, it destroys, it exiles, it makes people sacrifice, it has the best board wipes and in rare cases it even counters spells. It truly is the all terrain vehicle of removal. So it should be no surprise this first category contains the most cards. I wont mention the obvious and at times pricey cards like Path to Exile (I just mentioned it, didn't I?). Instead budget options like Crib Swap are where I'm looking. Crib Swap not only exiles a creature for a very low price, but it's a tribal instant which can actually be useful in rare and corner cases. The downside is you give your opponent a 1/1 Shapeshifter, but if that's the price you have to pay, it seems like a true bargain.

There are a very long list of mass removal spells in white, many of which fall under the budget category, some personal favourites include Kirtar's Wrath, Descend upon the Sinful and End Hostilities. I love End Hostilities specifically because of the random additional killing of any Swiftfoot Boots, Lightning Greaves and swords of things! So many swords of many things!

Finally, when it comes to getting rid of your opponents commanders, white has a hidden gem of a card called Renounce the Guilds. On the surface it looks like a less than desirable option but since most commanders you'll encounter are multicolour, it becomes the perfect situational spell to cast, like say after a board wipe when everyone is getting their generals back in the game. It is a very underrated card that can often force the best stuff on the battlefield into the graveyard. 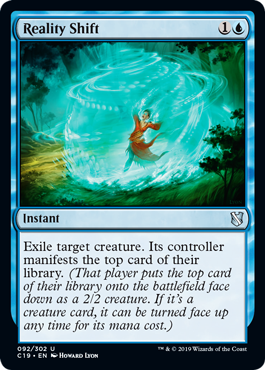 Blue is the classic “remove before it gets here” colour because of the ever present and powerful Counterspell. But aside from the myriad of excellent ways to counter spells, what can blue offer us if they slip something by our ever watching eye? Much to Mark Rosewater's chagrin, blue actually has a very efficient and powerful suite of pointed removal. Rapid Hybridization joined Pongify a few years back and recently it got it's best on board pointed removal spells in Reality Shift and Imprisoned in the Moon. Sure with all these examples the person gets a creature (or land) to replace the one they lost, but more often than not in EDH the creature you need to kill is either a 20/20 or some excellent utility creature creating a lot of problems for you. But with all these spells your problems are solved.

When it comes to mass removal, Blue does have one of the best board wipes but for budget players, Cyclonic Rift may not be an option. In which case, Whelming Wave does a decent impression at sorcery speed while for about a dollar more, Evacuation is always around at instant speed. 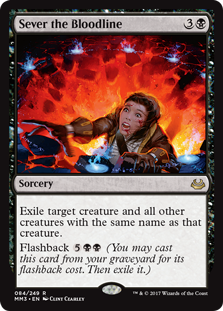 Black really is the colour you think of when you look at removal. Cards with scary names like Murder and Doom Blade and while the abundance of removal spells both pointed and mass are great, they actually end up being somewhat overwhelming do to the restrictions placed on them. Shriekmaw is without a doubt one of the best kill spells, but it has trouble dealing with black, colourless and obviously indestructible threats. Which is why I think Sever the Bloodline and Gild are two excellent and very underrated removal spells. While sadly not available at instant speed both handle nearly anything and give you a little extra value if the time is right.

Black also has a lot of high costed, yet effective mass removal spells like In Garruk's Wake but if we're talking closer to the 6 mana range, it's tough to beat Extinguish All Hope or Crux of Fate. Occasionally these spells might leave someone with a creature and thus a slight advantage, but 9 out of 10 times these are great board wipes at a low dollar value. 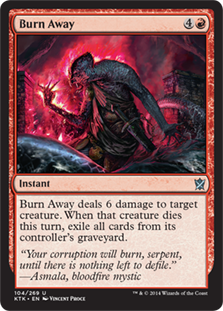 While Red is arguably the best removal colour in just about every other format, red has problems with the scale of Commander's creatures. So while Lightning Bolt and Flametongue Kavu are great in some other formats, they become only fringe playable in Commander. But there are exceptions Burn Away brings a big enough damage hit plus the added bonus of exiling a graveyard.

Mass removal for red tends to suffer from the same problem, but usually the spells you'd like here are X spells like Earthquake or Comet Storm, both which reward big mana, but that can be a hefty price when for a fraction of the cost you could have cast End Hostilities and had the same or better result. Again exceptions exist, one being Chandra's Ignition, where for a bit more of a set up cost, the damage dealt can be huge without breaking your mana bank or your regular bank for that matter.

p.s. All red damage spells get better with Everlasting Torment on the battlefield so keep an eye on your Rakdos decks for that 😉 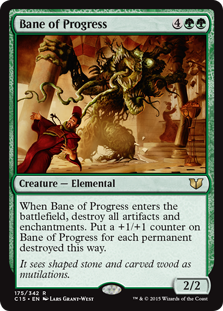 Green is certainly the most removal deprived colour when it comes to creatures despite the printing (and Mark Rosewater's lamenting) of cards like Song of the Dryads and Lignify. But green has other strengths, namely non-creature removal. Krosan Grip is among the best but cards like Brutalizer Exarch and Deglamer make it especially tough for the artifacts or enchantments you target to be brought back.

On the mass removal side of things Bane of Progress is an amazing option but is slowly crawling up in price and won't be budget for long, so get out there and get your copies! 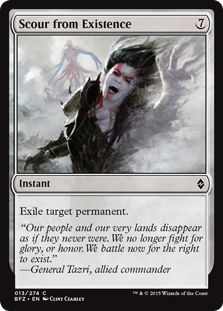 Colourless options for pointed removal are generally pretty situational and get less so the higher up the mana curve you go. And while 7 mana is a lot, sometimes you just really need to get rid of that one permanent you're willing to make it happen which is why Spine of Ish Sah or Scour From Existence can be godsends in any deck.

On the flip side, when you want everything to go away, the colourless crew has some of the best most efficiently costed board wipes around. Nevinyrral's Disk is a true classic and Boompile is a recent lookalike that reset the entire board, unless that is, you've previously invested in a Soul of New Phyrexia ability in which case you are not a nice person. 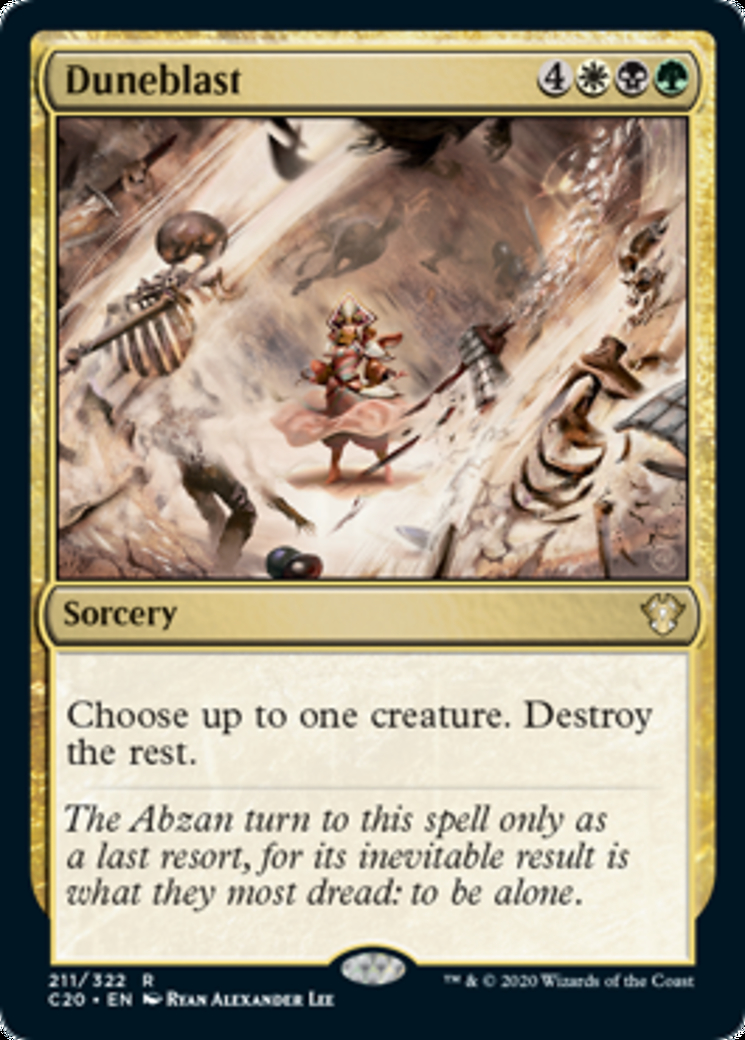 The multicoloured options for removal are many but when we look at the best budget options it does tend to look like a bit of an Orzhov party. That should be no surprise since White and Black are the best at spot and mass removal and have cards like Utter End, Anguished Unmaking and Merciless Eviction. Even Duneblast with a splash of green is just an Orzhov card with an extra colour.

There truly are too many cards to list here but hopefully this gave you a head start on finding some great removal that won't put too much of a strain on your purse strings. But then again, why does your purse use strings and why are they being strained by having less in them? Until next time gang!