Card of the Day: Nexus of Fate 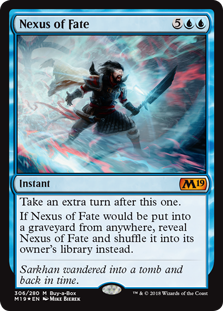 Oh, boy. Where to start with this one?

This is one of those funny cards that created controversy simply by existing. When Guilds of Ravnica was released, Nexus of Fate was released exclusively as a Buy-A-Box promo. People immediately had issues with that announcement as it meant that getting the card would be arbitrarily hard for anyone who didn't want to buy a full booster box. Considering that this card was already in high demand in a fringe sort of way, this created another problem in the secondary market: Non-foil versions of Nexus of Fate didn't exist. This left only the more expensive, foil route available if you wanted to play it in Standard. Plus, thanks to the way they ran the promotion, getting one was pricey enough as it was. And getting a whole playset of it? That was a whole different story.

That's all without even getting into what the card does in the first place. Not only does Nexus of Fate net you a free turn, it also shuffles itself back into your library once you cast it. And the value doesn't end there. That's all at instant speed.

You can play Nexus of Fate at the end of your opponent's end step and guarantee yourself two turns in a row. It's entirely possible to tempo with Turbo Fog until all you have left are copies of Nexus of Fate. And once there, you've essentially already gone infinite. There's also ways to indefinitely recur the card, and even cast it for less mana (though people seem content to cast it normally). It's fairly easy to create a midrange deck that simply stalls the game out, and it's not that hard to subvert the rules and create a small win condition that essentially stalls the game until someone has had enough and you take the win. I'm looking at you, Murmuring Mystic.

Right now, it seems pretty certain that if you sit down across from someone with a The Mirari Conjecture, a bounce spell (likely Blink of an Eye), a Teferi, Hero of Dominaria and a Search for Azcanta, they have a Nexus of Fate sleeved up. In that case, you better pray that a time out at a tournament will be your friend. That, or that you can reliably end the match before they start railing off an endless amount of turns.

Normally I talk about cards that I love in these articles, but there has been so much drama and controversy around this card that I had to take a look at it. Wizards has even taken the time to create a method of reporting players for stalling Arena games with it, and banned the card in Best of One there. Looking past the possible infinite combos in Standard, I think it's pretty interesting to see a card with this kind of power printed recently. In fact, I hope that this is the direction that Wizards will be taking with such promotions in the future.