Welcome all to Chapter 1 of the Ultimate Guide to AFR Limited and Prerelease. In Chapter 1 I’m going to be focusing on the cards you see the most in your booster packs, commons. Commons in AFR are all about giving the player choices to make. While this might not raise the power level of the cards is does make them more versatile. This will allow you to play more commons in your deck if you aren’t able to land as many bomb rares as you would have liked.

Here are some of the best commons from AFR that you will want to be looking out for when building your first Limited deck. 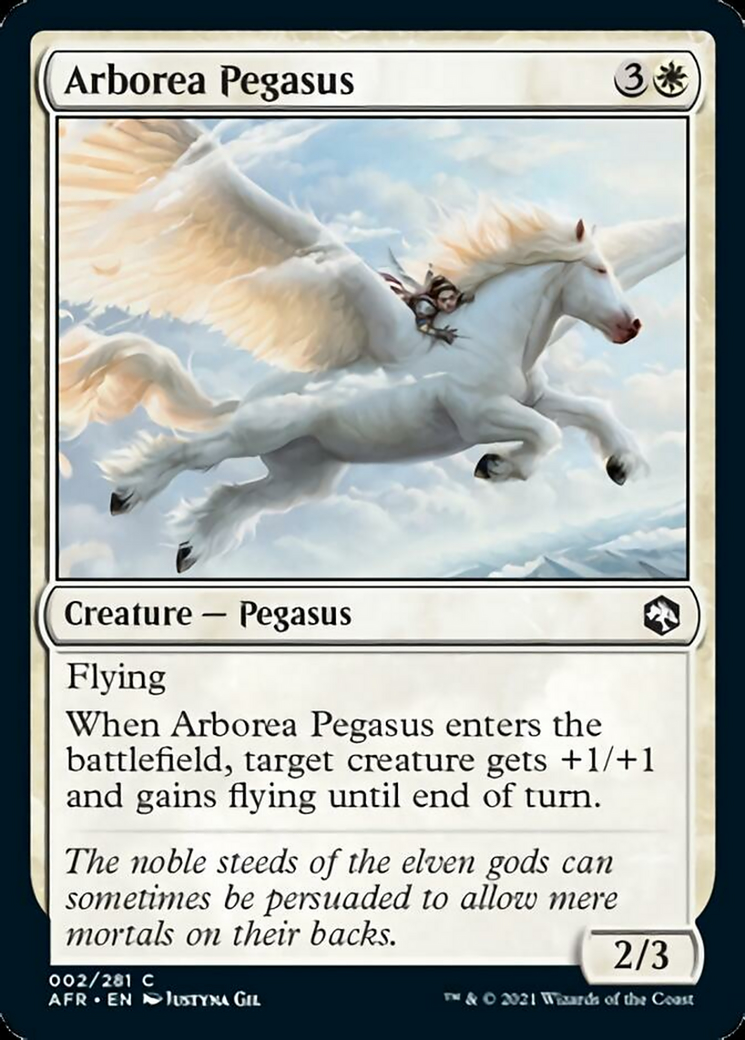 Arborea Pegasus – Not often is a 2/3 Flying creature for four mana considered a strong common but being able to give any existing creature Flying and +1/+1 will lead to some heavy damage. Being a 2/3 flyer will get in for a few attacks as well. 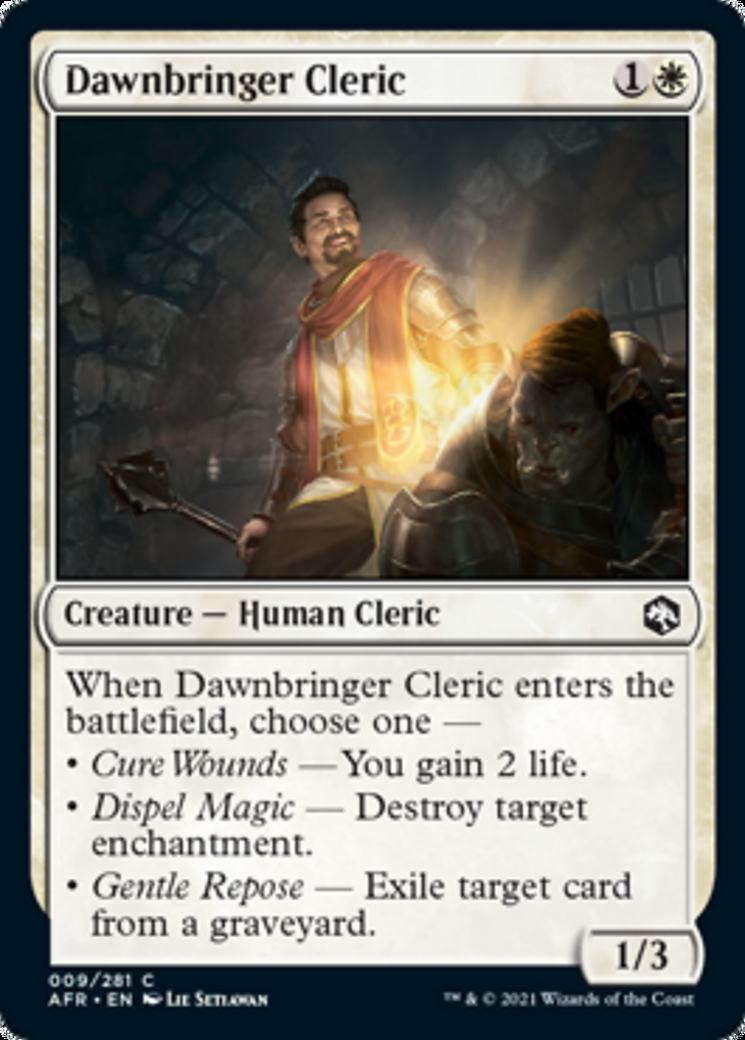 Dawnbringer Cleric – I love the versatility of this card. Most often you will play it on turn two and gain two life, but it can also be used as situational removal for a pesky Class Enchantment or a troublesome card in a graveyard. 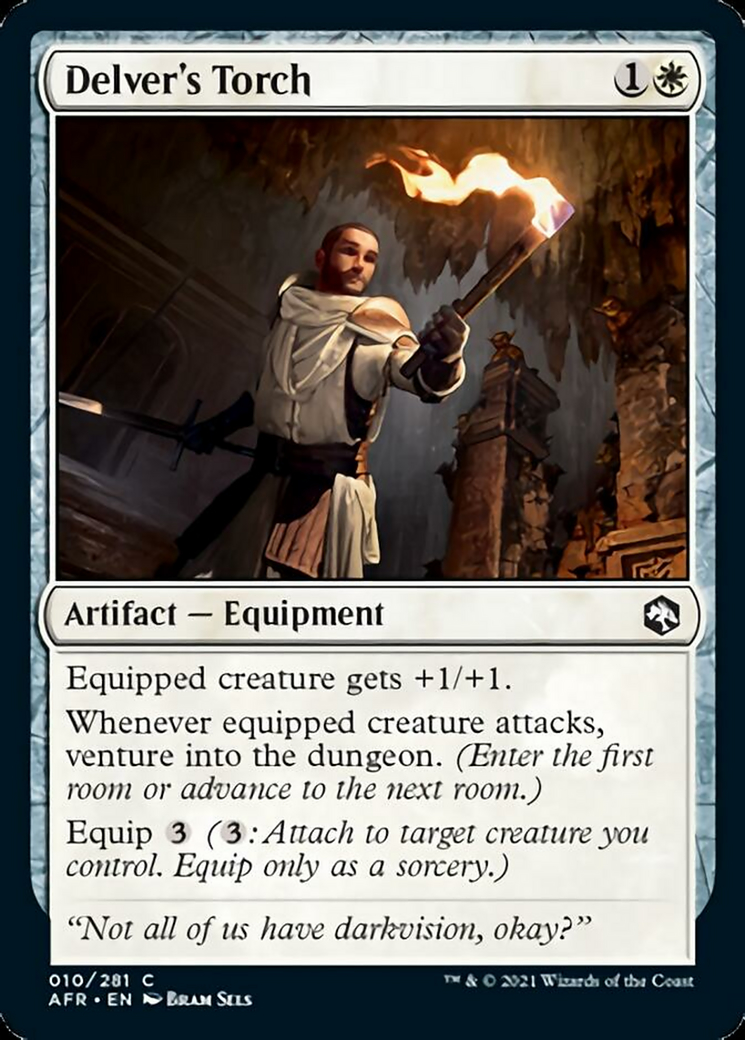 Delver’s Torch – This has turned out to be one of the more powerful Equipment cards in the set for limited. Having a recurring way to venture into the Dungeon allows you to complete multiple Dungeons a game, even if you aren’t getting in for any damage. 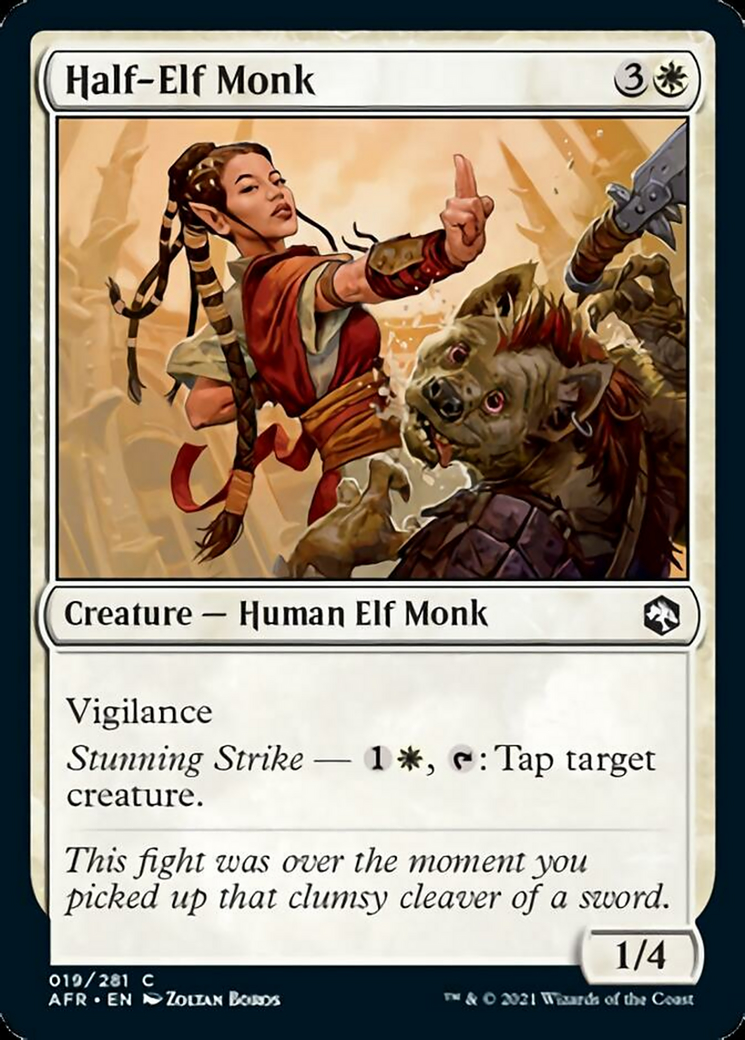 Half-Elf Monk – There's nothing like attacking with a Vigilance creature and still being able to tap down a creature. Tap down creatures are always a positive play, and this creature also has good defensive stats at 1/4. 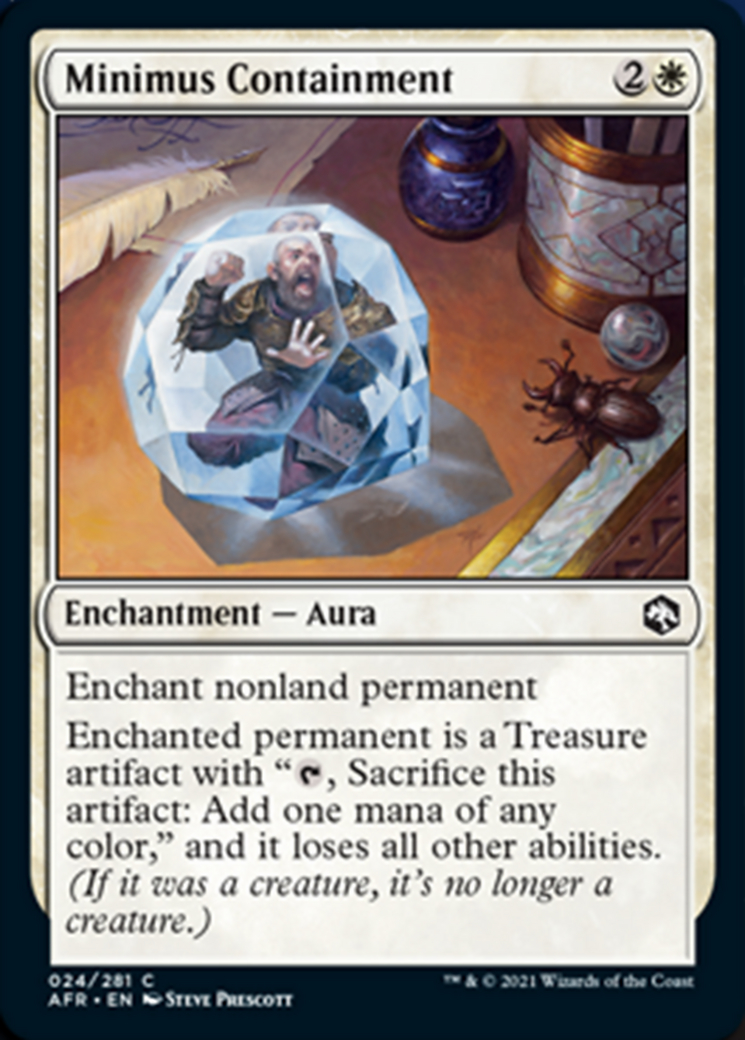 Minimus Containment – Giving your opponent a Treasure in exchange for their biggest threat is a trade-off I’m willing to make almost every time. It can take care of Planeswalkers, Enchantments, Artifacts, and Creatures for only three mana. 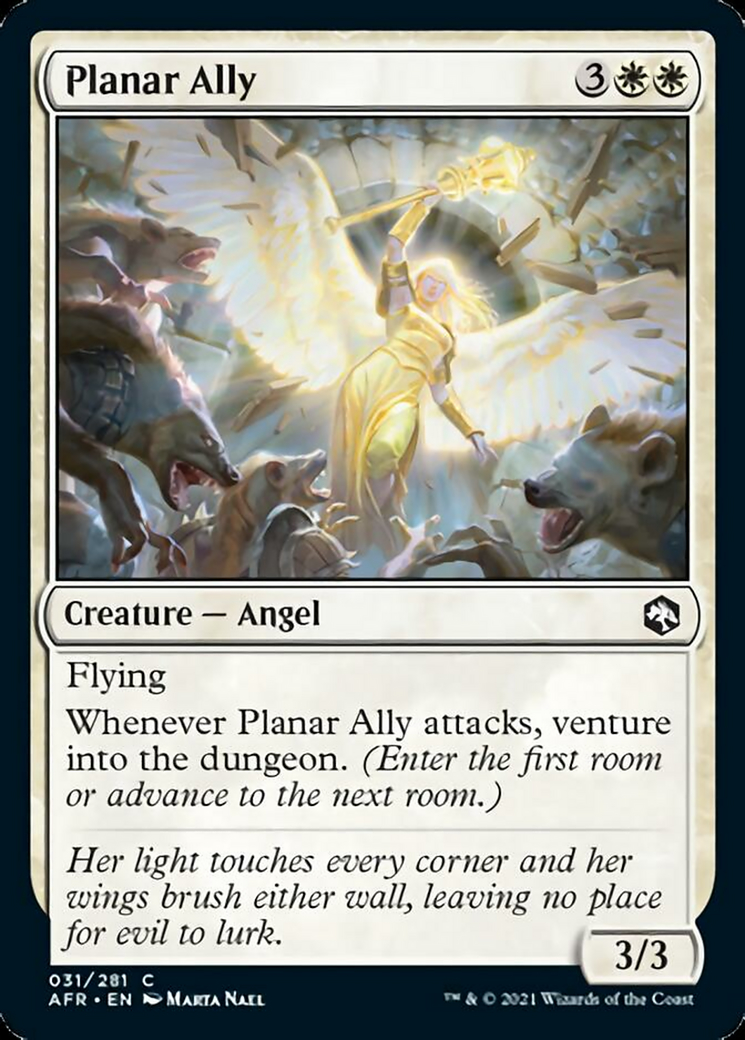 Planar Ally – This is a solid common that starts out as just a 3/3 Flying creature which is great. Throw in a chance to get some repeated ventures into the Dungeon each time it attacks, and you've got a value train. 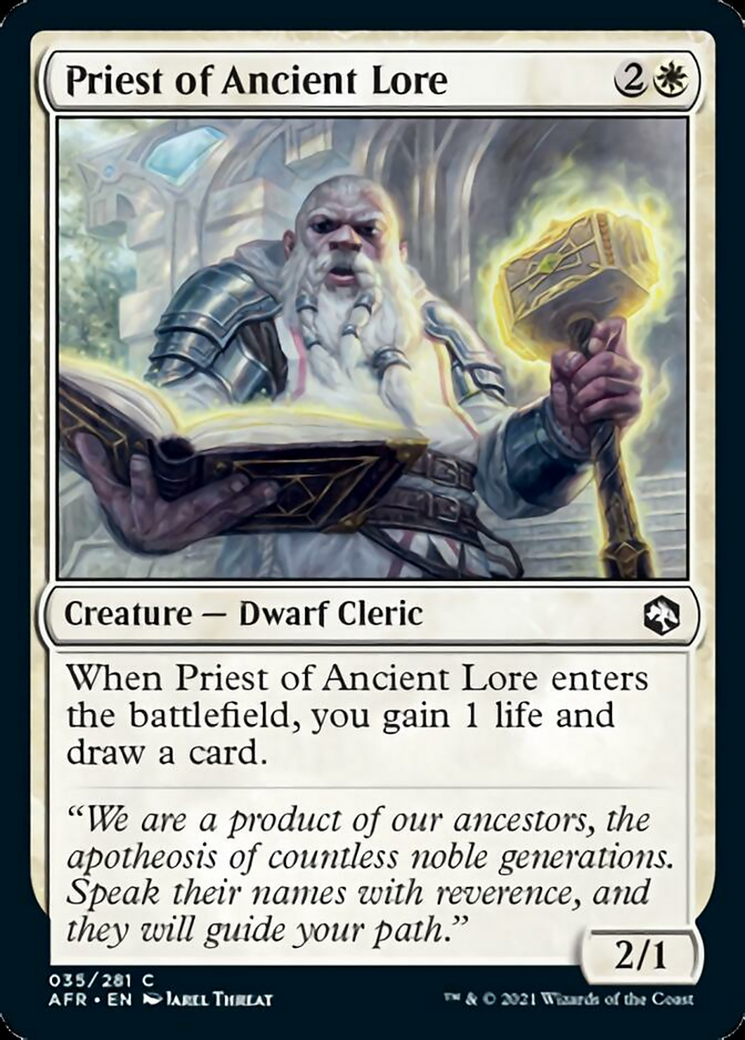 Priest of Ancient Lore – It is unheard of to have a White creature that replaces itself with card draw and no drawback. It also throws in some life gain to help with a couple of life gain synergies going on in the set.

You Hear Something on Watch 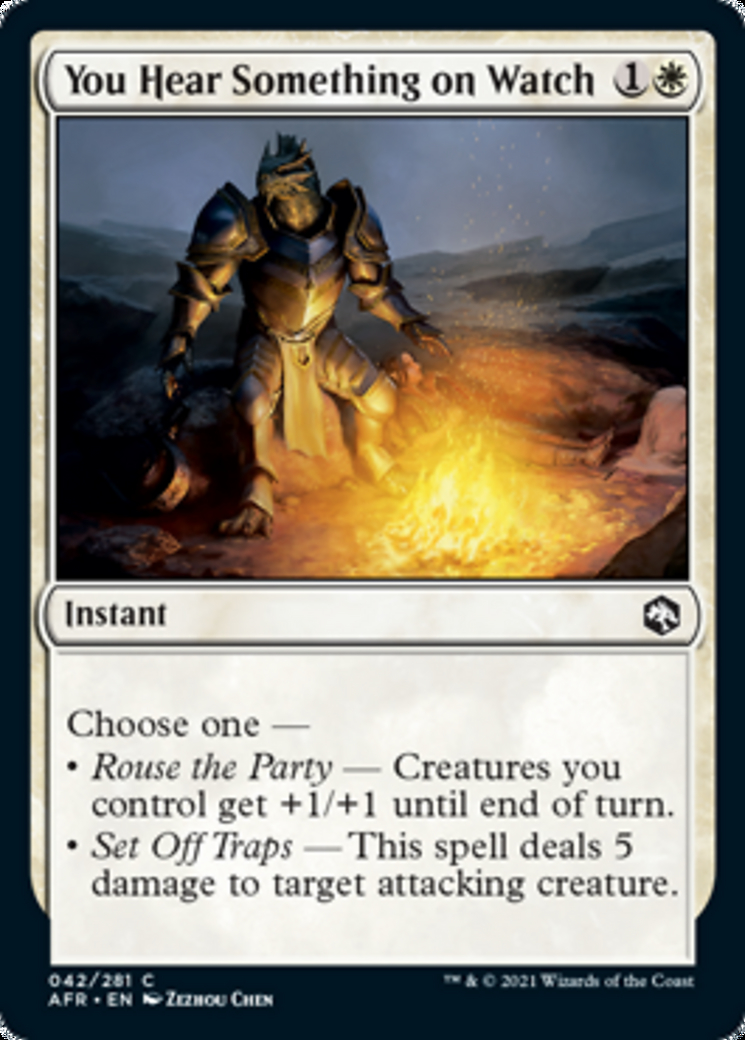 You Hear Something on Watch – This is a double threat combat trick in which I’ve used both options multiple times in Limited games. It can save a couple members of your team by pumping them up when you attack or takedown an attacking threat of your opponent. 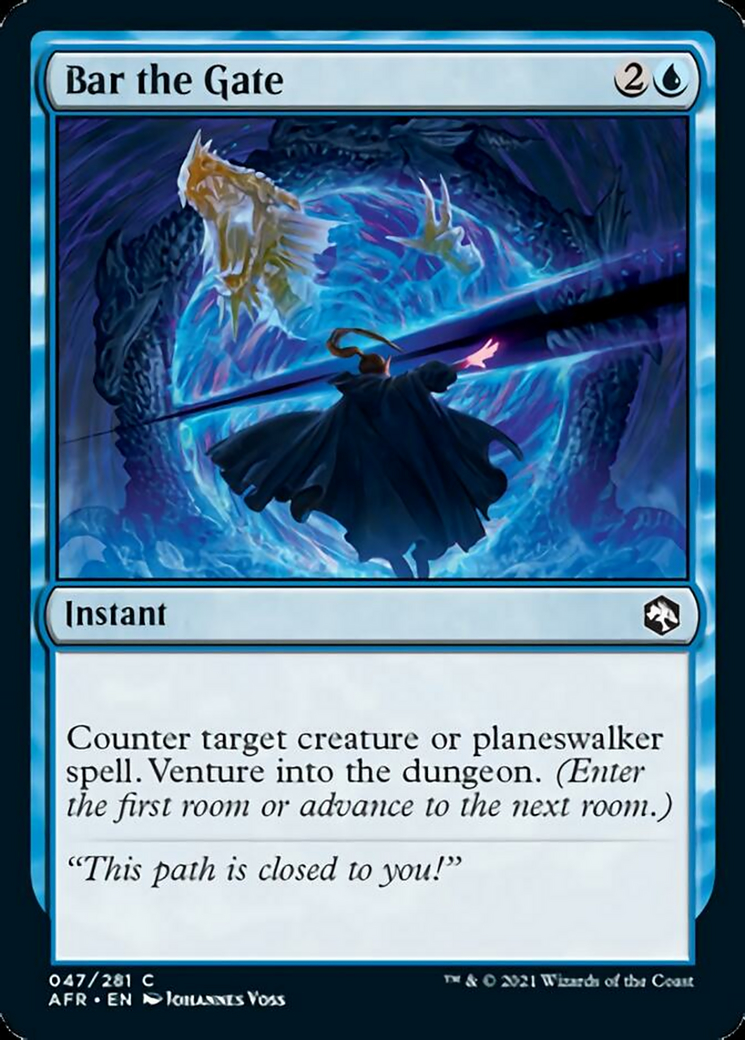 Bar the Gate – Counterspells are always played in Limited and this one throws in a free venture into the Dungeon attached to it as well. A little bonus value, but it goes a long way. 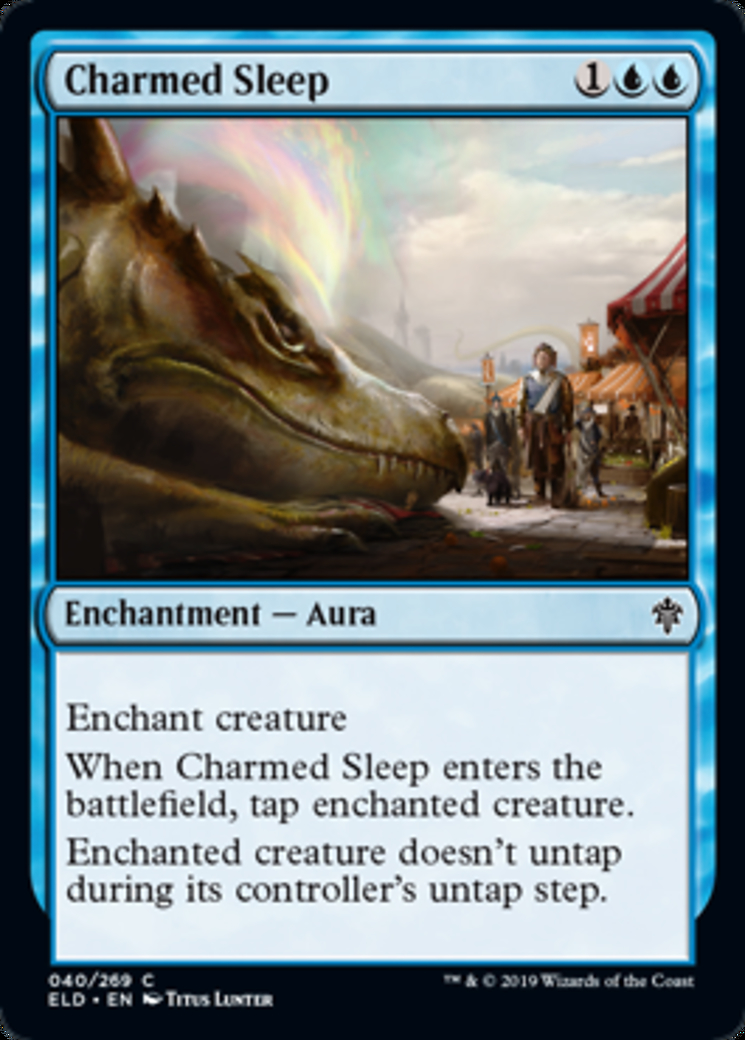 Charmed Sleep – This reprint is great to have as a way for Blue to lockdown a creature. It’s cheap at only three mana and even taps down the creature when it enchants it.

Pixie Guide – With D20 rolling being a mechanic in this set, this 1/3 flyer for two mana allows you to up your odds a bit. Even if it helps you once, it’s often worth it. 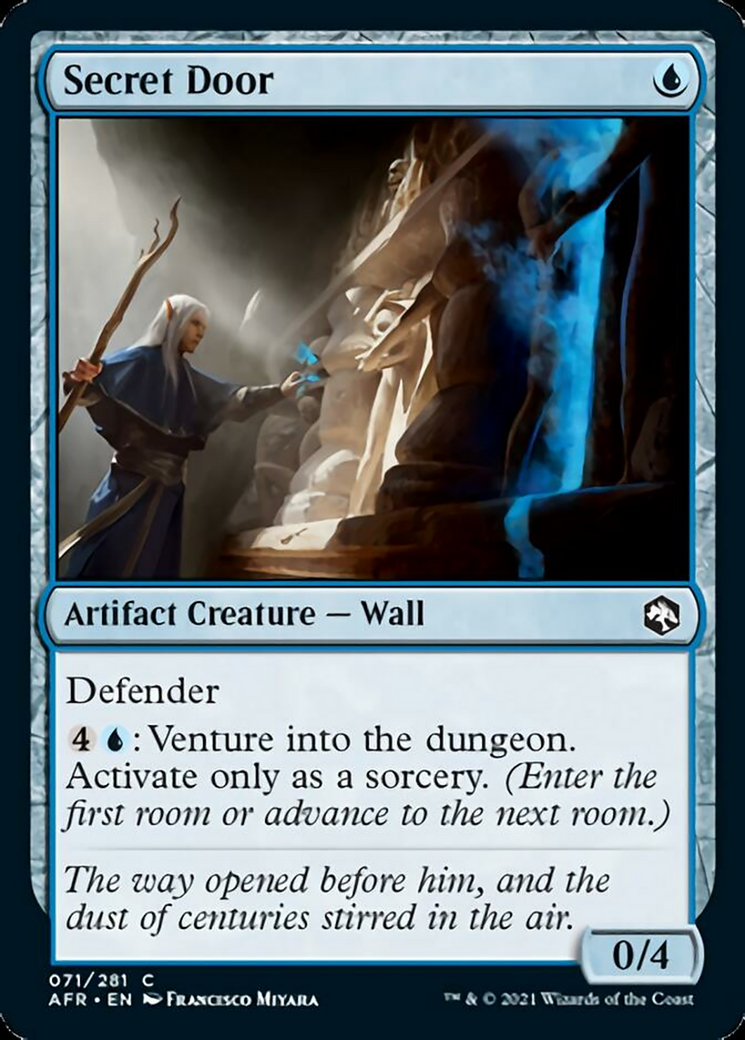 Secret Door – This is a great early blocker that later can become a value engine. In the late game, you can use your extra mana to venture into the Dungeon each turn working your way towards completing one.

You Find the Villains' Lair 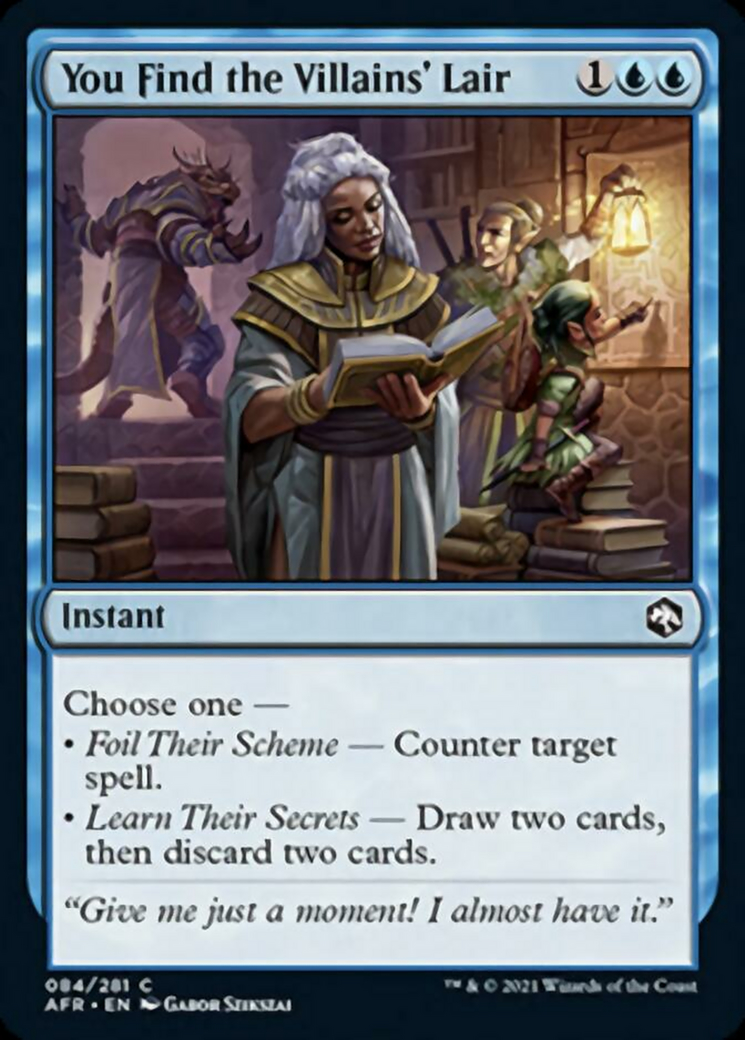 You Find the Villains’ Lair – Most often this will be used as a counterspell for three mana which is fairly solid, but every once in a while you’ll need better card selection in your hand and you can use to cycle out some cards for better ones. 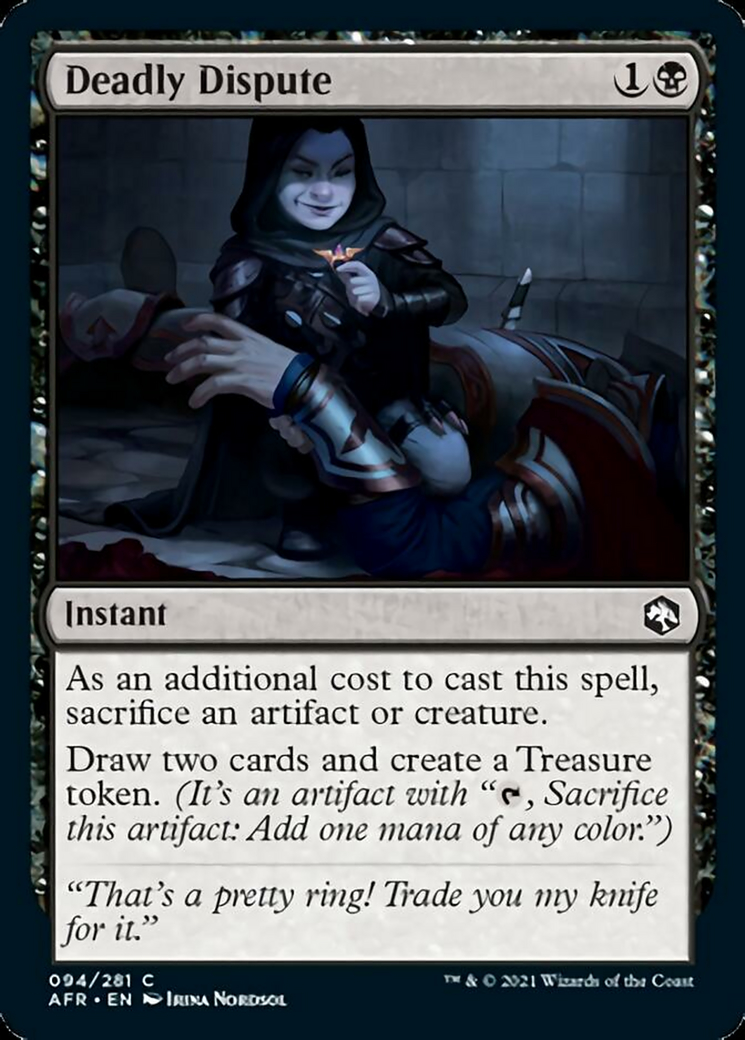 Deadly Dispute – This is a great spell to get some value out of an opponents’ removal spell or an extra Treasure token. If you sacrifice a Treasure, it’s no big deal as you’ll get one right back. 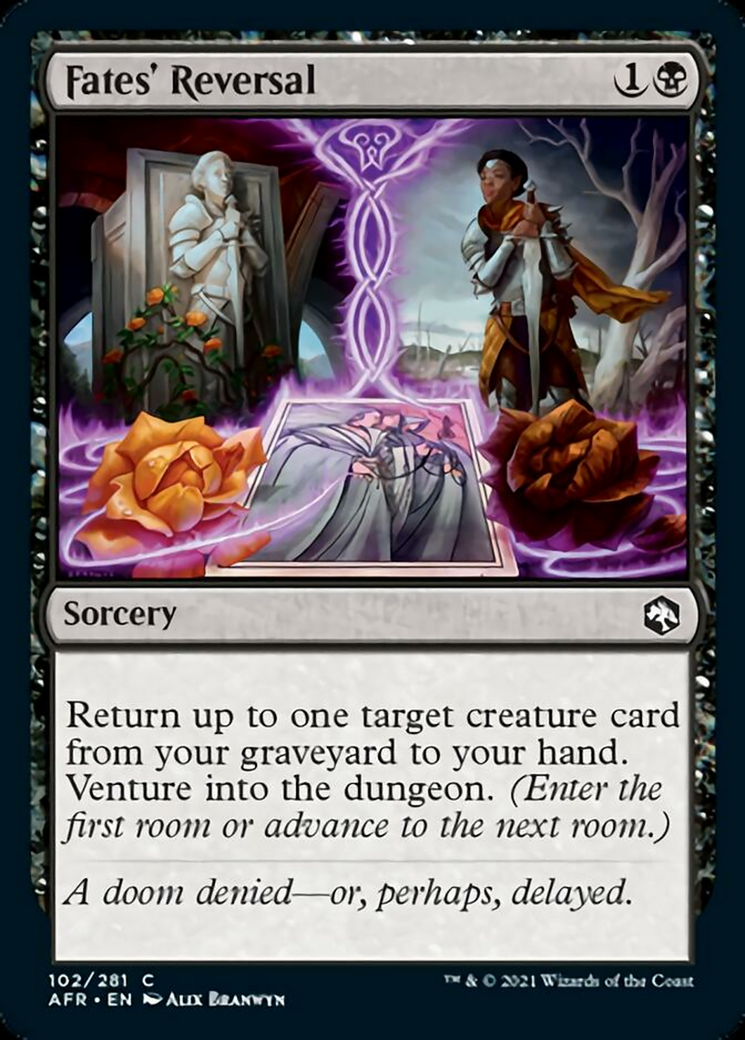 Fates’ Reversal – This allows you to get back your best creature from your graveyard while also venturing deeper into the Dungeon, all for only two mana. 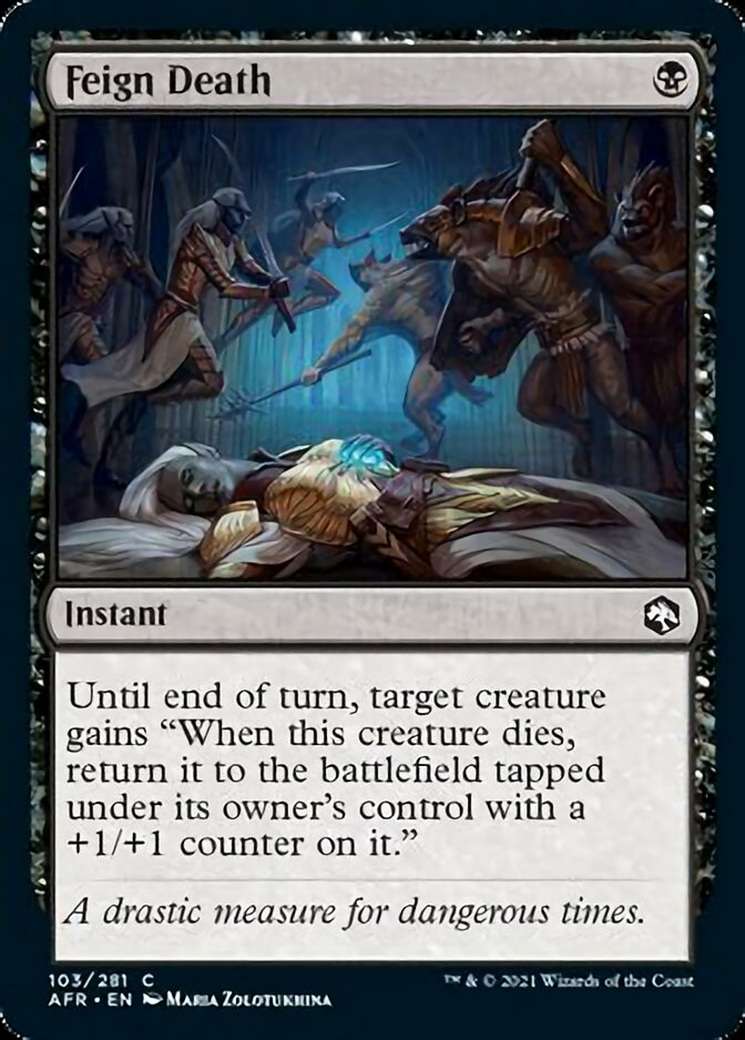 Feign Death – This is another spell to either protect you against a removal spell or trading during combat. Adding a +1/+1 on the flip side is a nice bonus as well as any potential enter the battlefield effects. 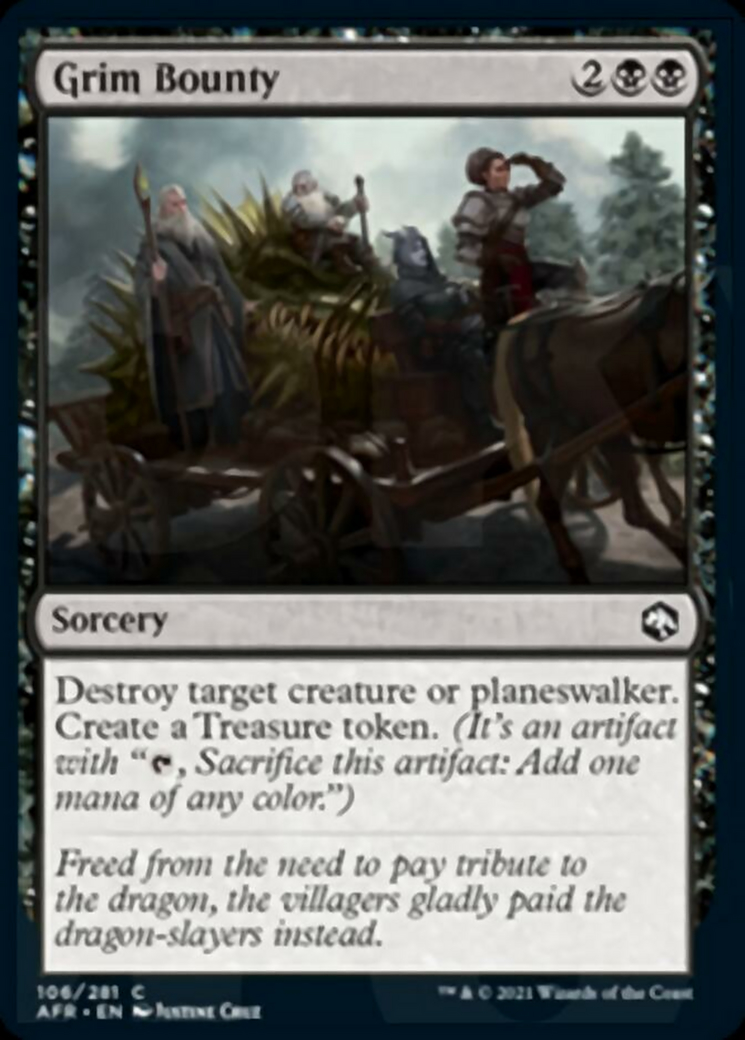 Grim Bounty – A classic four-mana creature removal common for Black, but with a few upsides. It can also destroy a Planeswalker if needed and gives you a Treasure token to help you ramp or splash into another colour. 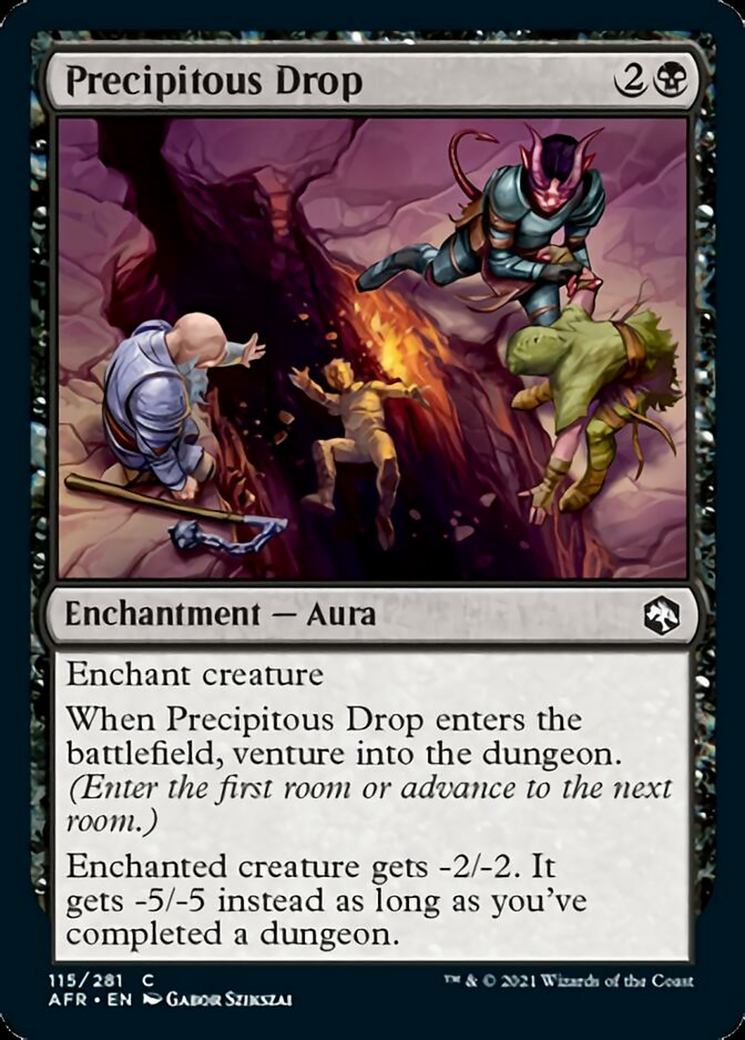 Precipitous Drop – You're starting to see a theme in some of the top common cards on this list. This Aura can kill a small threat with the possibility of a larger one later in the game. You also get the bonus of venturing into the Dungeon to get extra value out of the card and work closer to completing a Dungeon. 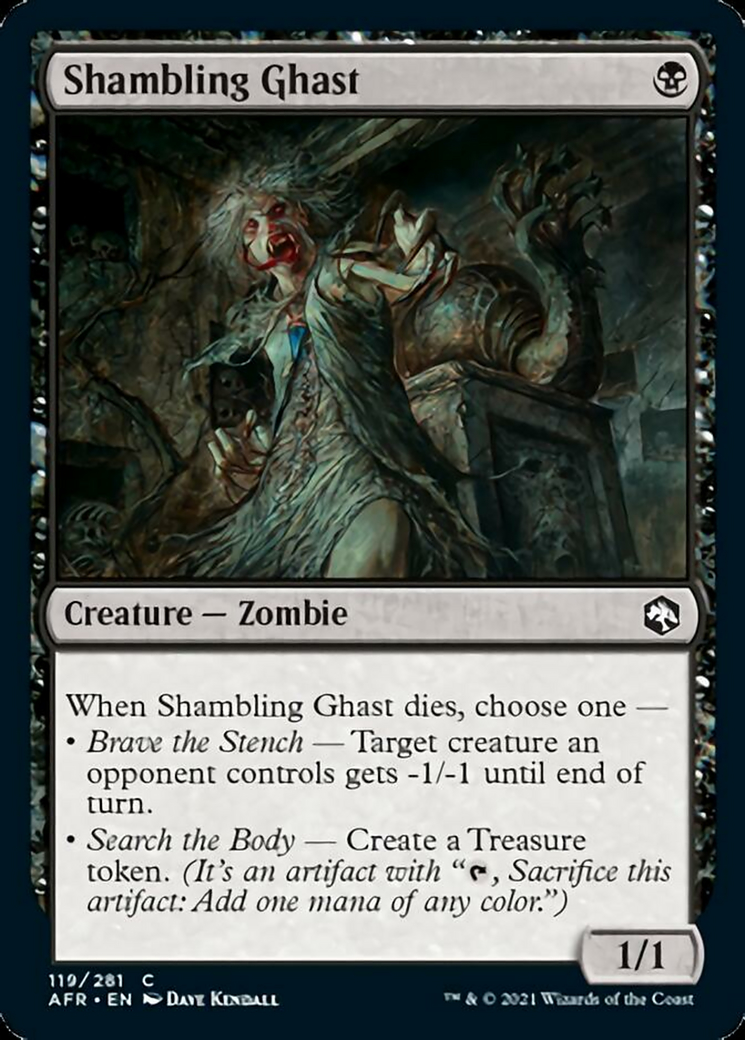 Shambling Ghast – Never has a 1/1 creature done so much. It’s a great creature to block with and can prevent your opponent from attacking at times. 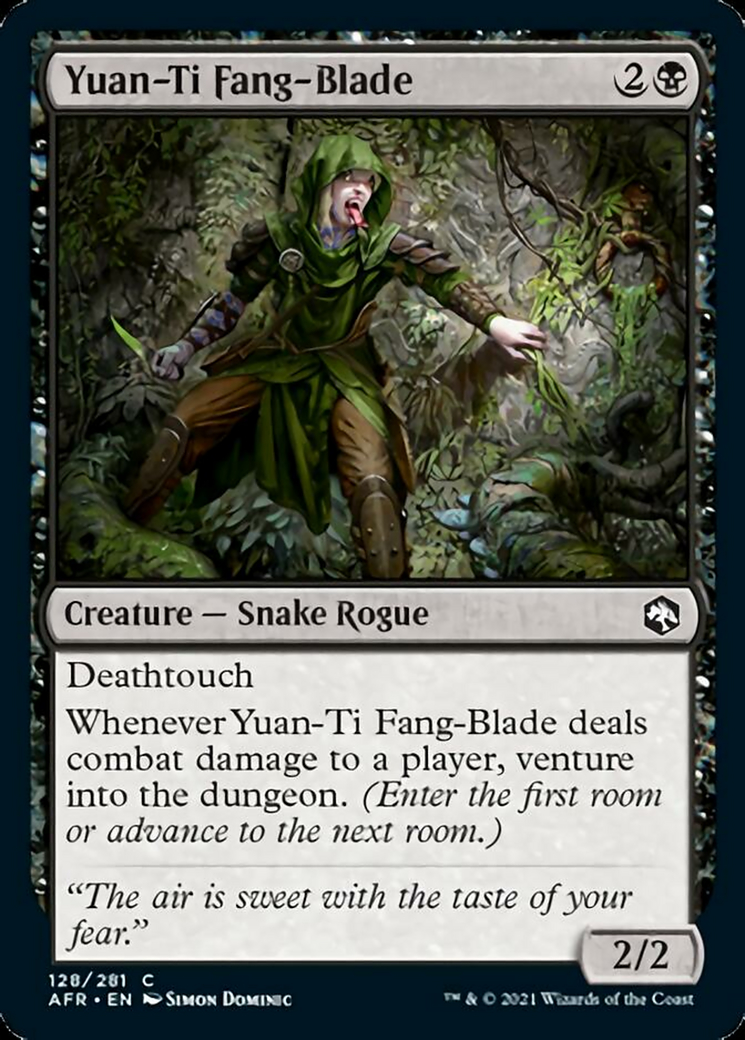 Yuan-Ti Fang Blade – Deathouch creatures are always great, especially ones with more than one power. It makes it so they can sometimes even block and survive. This creature though has a rather good reason to attack so it can venture into the Dungeon if you deal combat damage with it. 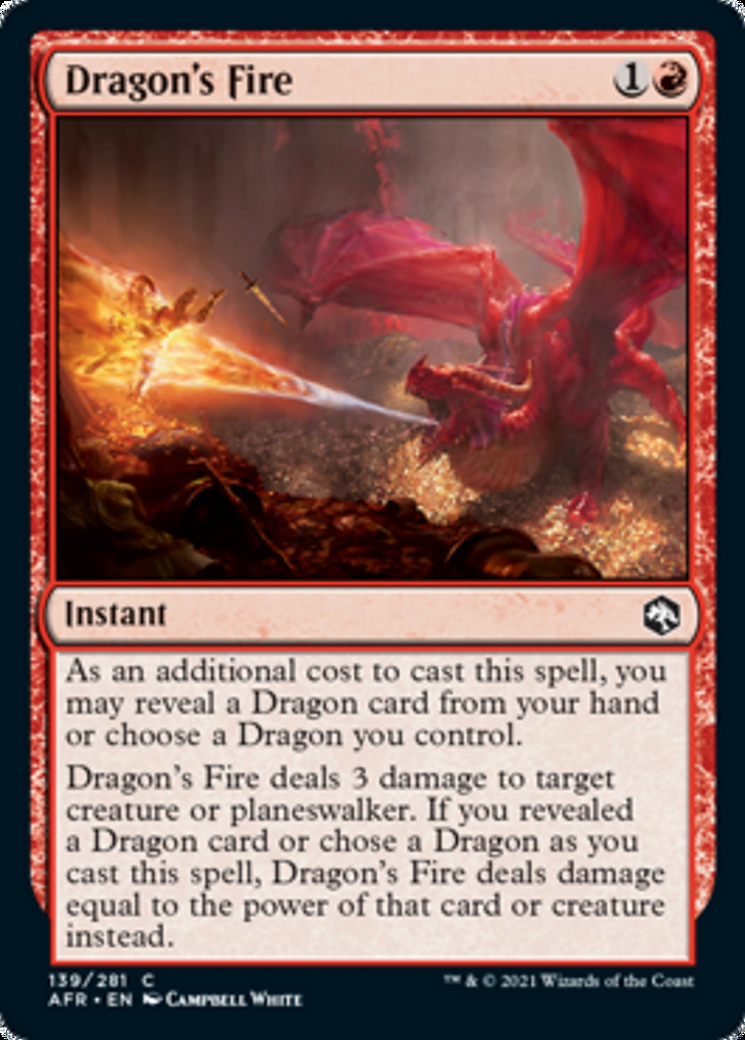 Dragon’s Fire – This is a cheap instant speed removal spell that will deal three damage most of the time and potentially four to seven damage if you have a Dragon in your hand or on the battlefield. A must-play in any deck playing Red. 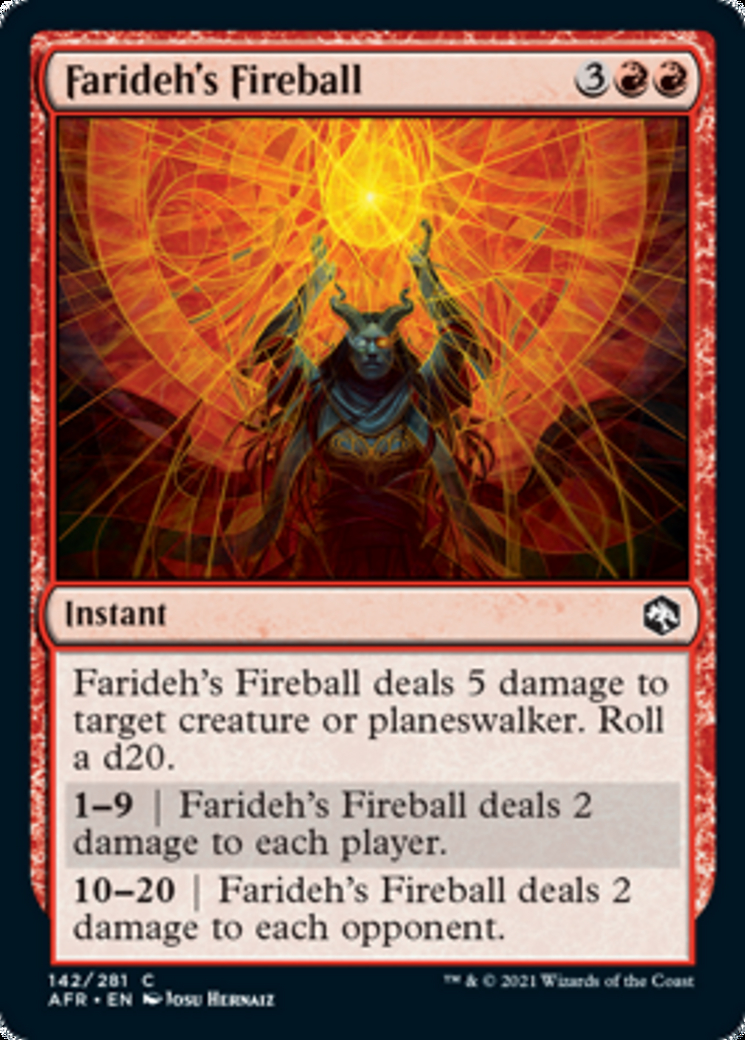 Farideh’s Fireball – A great instant speed removal spell to deal with larger threats on the battlefield. To add some value you get to deal two damage to your opponent as well. 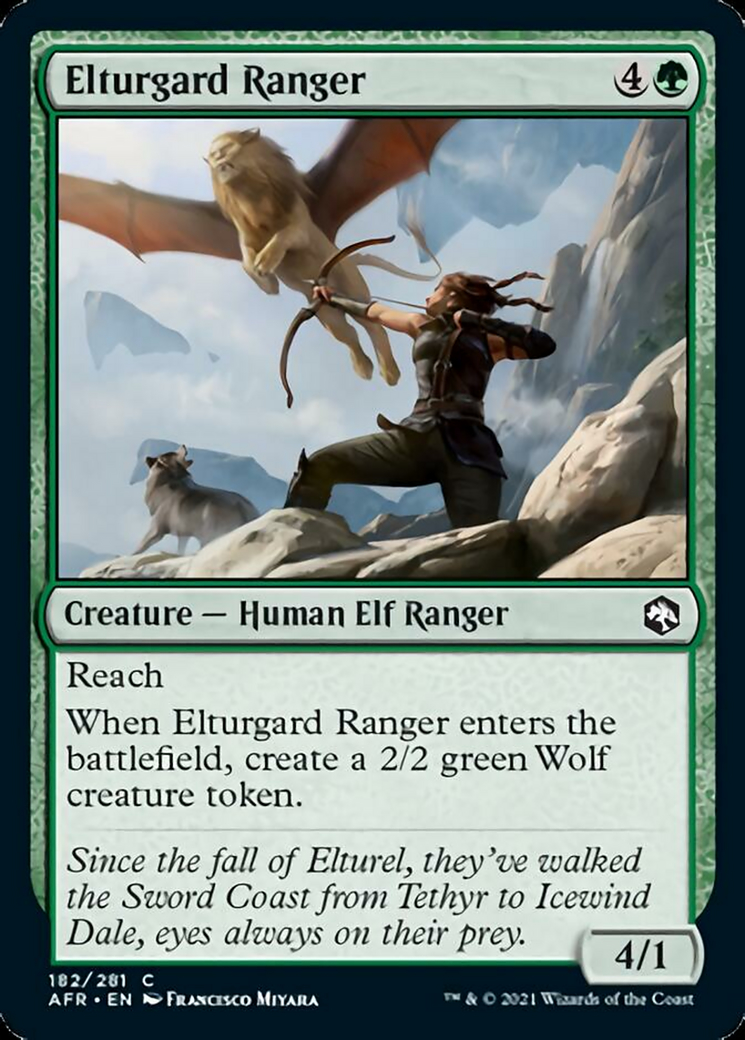 Elturgard Ranger – Another creature that gives you more than one creature on the battlefield. For this one, you get six power, but four of it can be used to block Flying creatures which can come in handy for a Green deck. 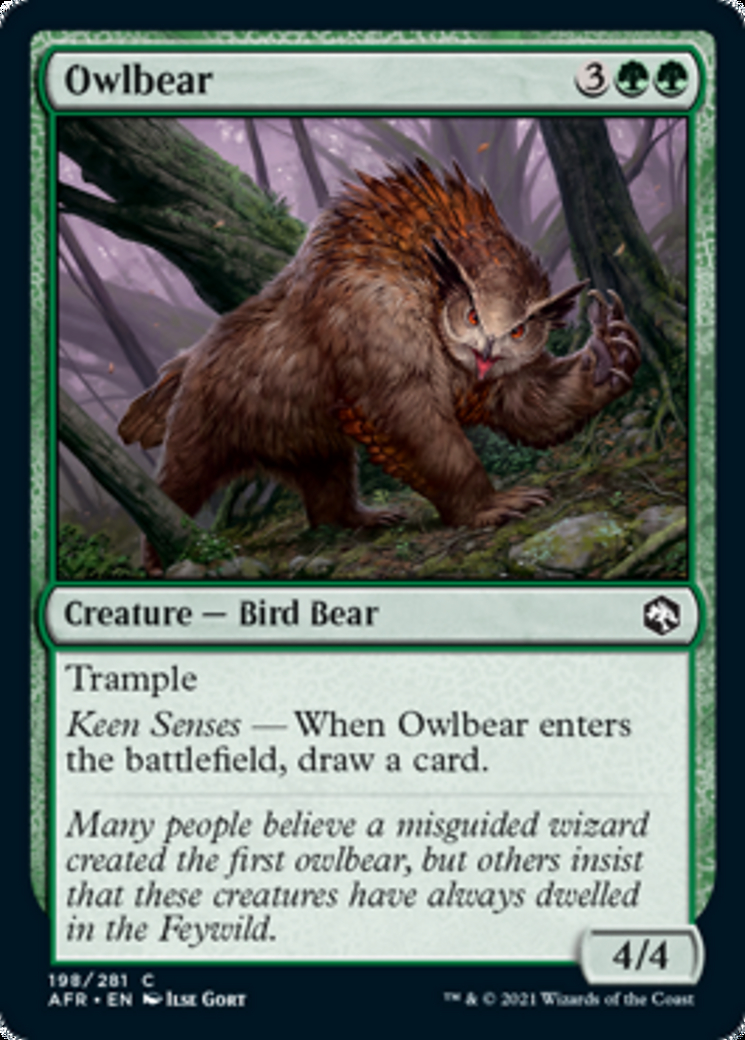 Owlbear – It’s always nice to have a creature that replaces itself (see Priest of Ancient Lore above). This is just a larger version of that with the bonus of having Trample to help it attack.

Spoils of the Hunt 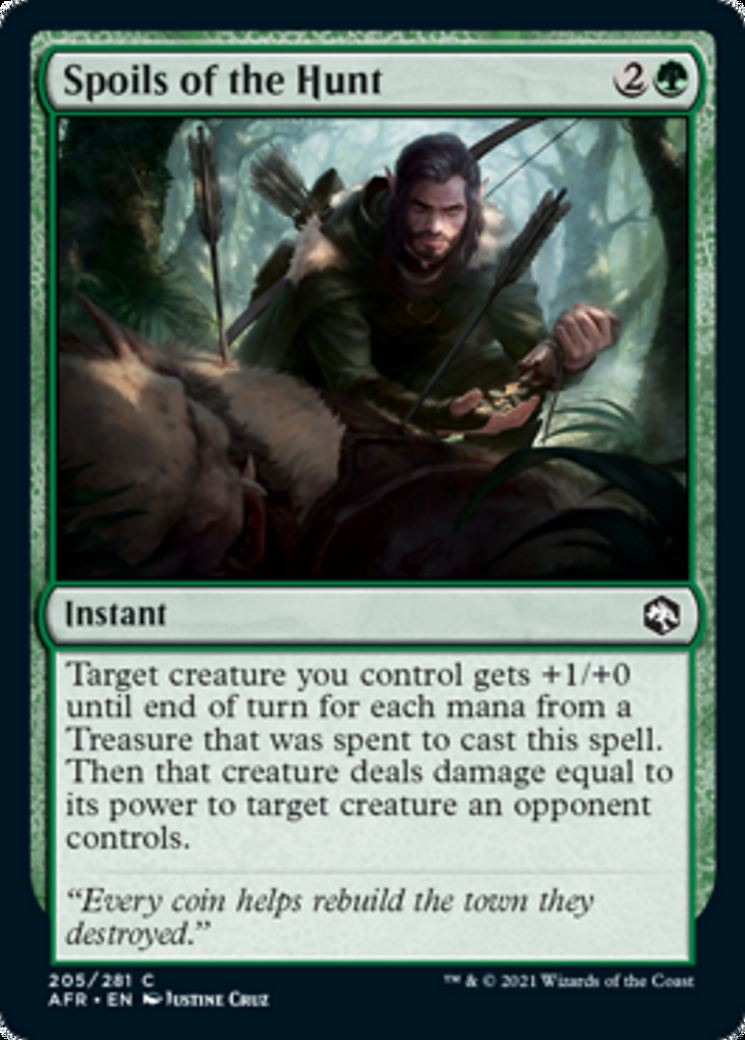 Spoils of the Hunt – Any type of removal spell you can have in Green is great. I like the trend recently of moving away from fighting as a green removal to “that creature deals damage” effect. This keeps your creature alive and works very well with Deathtouch creatures. 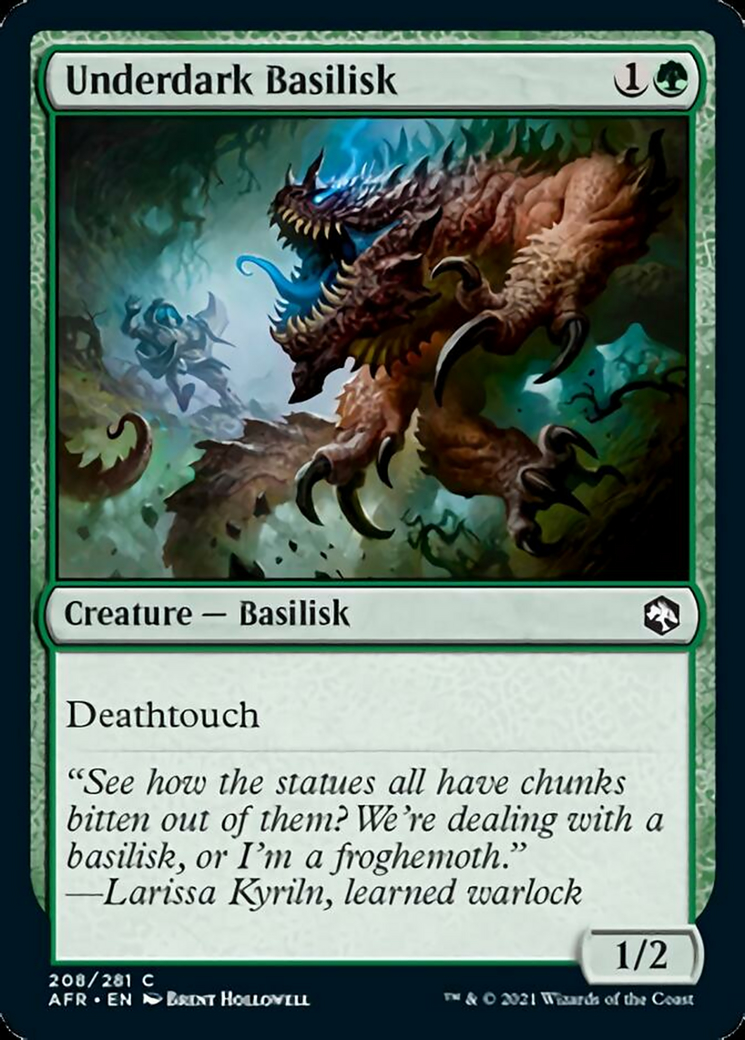 Underbark Basilisk – Speaking of Deathtouch creatures, this is a nice two-mana one that'll allow you to trade up during combat or you can put some equipment on it to make a feared attacker. 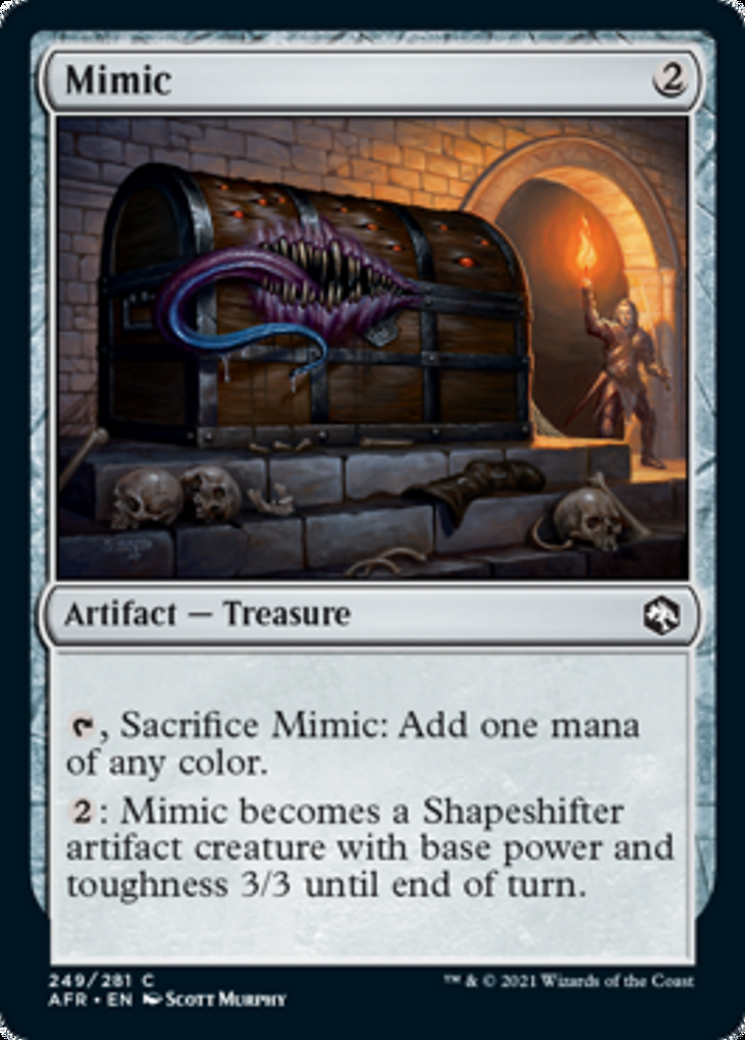 Mimic – There isn’t much mana fixing in this set other than the abundance of Treasure tokens. This can act as mana fixing if you really need it or as ramp. Its better use is as a 3/3 creature that avoids sorcery speed removal.

I hope that this list of common cards can help you navigate the tough deck choices needed for Prerelease and Limited play. You'll need to play some commons in your deck whether you want to or not, so try and find the best ones of your colours. Thanks again for reading Chapter 1 of the Ultimate Guide to Adventures in the Forgotten Realms Limited and Prerelease. Read on to the next Chapter in the Guide to see the top uncommons for Limited and Prerelease. If you’ve missed any of the other chapters for this guide, click below to check them out.