That being said, this week I'm not actually going to be looking at one of my usual Budget Brews. We're going to take a look at a deck that's become my go-to Modern deck and something that's come close to my heart as I continue to work on it. It is still cheaper than most of the Tier one or maybe even Tier two decks, but this is a deck where I'm not really worried about the budget.

The first few decks I worked on and wrote about for MTGCanada.com were centred around Jeskai Ascendancy. Well, there's a reason for it. The card is absolutely broken. It does two of the best things in magic that you can do: Loot (draw and then discard) and it'll pump and untap any creatures you have in play. Both of the things on this card lets you win the game two different ways giving you multiple angles of attack.

All told the deck at WizardTower.com the deck costs about $450CAN and only about $136TIX if you're looking to play it online (but seriously, it's rough to play online).

Some things that I'm looking changing or upgrading on the deck would be changing the random Bloodstained Mires and Wooded Foothills into Scalding Tarns and looking at the numbers of Instants versus Sorceries. I kind of want to try out a Quicken or two in the deck. 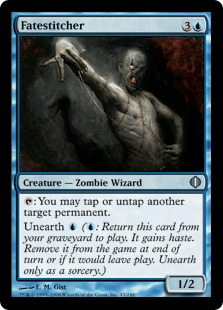 It's fairly straight forward. Get Fatestitcher into your graveyard, and Unearth them while you have a Jeskai Ascendancy on the field, play a cantrip, rinse and repeat. This ends up making a huge Fatestitcher and big Storm count numbers so you can win via Grapeshot or the Fabulous Zombie Wizard, or - like I've done on more than one occasion - win with both. I even tried Fling in the deck a “fun-of” but got rid of the card quickly: the only time you'd play the card is when you're going to win anyway and if your opponent has some sort of permission in hand, it's just a feel bad.

Only have 4 creatures in the deck can make it kind of rough, thanks to cards like Surgical Extraction or other graveyard hate strategies (I'm not one to hard cast a Fatestitcher, if you have to you're probably going to lose anyway). So we have a back-up plan: 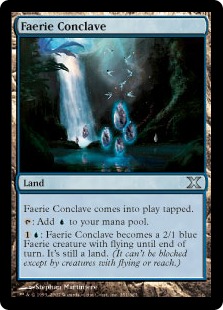 Faerie Conclave has evasion right off the bat, so you don't need to worry about pesky blockers and since it's a man land it's a little harder to interact with. The deck is also chock full one mana cantrips so if you're in a tight spot you can just keep tapping/untapping this card to make your mana and then swing in with a 20/19 Flying Faerie.

The benefit of Fatestitcher, however, is while it lets you untap your lands so you can keep your cycle going, it also lets you tap your opponent's permanents. Tapping their blockers is usually the first thing you go for, unless you're facing off against some sort of control deck. Then it might be that you go for their lands to either force the issue and make them play that Path to Exile (we hate seeing this card) and save everyone a little bit of time, or we tap their lands just to make us feel us a little safer.

Yes, if they Path your Fatestitcher early, you'll be thankful, and they might be as well if the clock is an issue, or they have problems closing out games in time. I've heard this deck called “Eggs 2.0” and that's because once you go off, it takes you a few minutes. Longer than storm, but with a bit more reliability since you have the engine to keep looting and untapping your lands.

No. It's true that the version that splashes green for mana dorks is able to go off a turn sooner, but I feel straight Jeskai is the better way to go for the deck. You're still able to go off Turn three or four and while you don't have a Glittering Wish package with Glittering Wish you overall have the better Sideboard plan to your weak match ups.

They also play way more creatures which leads to not being able to draw into more cantrips to keep chaining spells together, and the deck still plays usually two Fatestitchers on top of their mana dorks.

The Sideboard Plan is mostly to beat control, since it can easily be one of our worst match ups. When going against a control deck I usually bring in the Young Pyromancers, Dispels, and maybe Elixir of Immortality depending on if I think the game is going to go long and grindy. I also tend to leave in two Fatestitcher and cut a Jeskai Ascendancy.

Sure, Young Peezy may eat a removal spell, but you're usually able to get a couple of tokens out of it before it dies, and with an Jeskai Ascendancy on the field you'll be able to poke and slowly kill your control opponent to death.

Path to Exile and Radiant Flames come in against decks like Death and Taxes, or other linear aggro creature decks. I'll also typically bring in my Young Pyromancers and take out all of my Fatestitchers. Since this version is a turn or two slower than the green version, we can't usually race a good burn or affinity draw, so we just try and control the early game by killing their things and making way for our buffed tokens.

Spreading Seas is a great card as it can disrupt your opponent's mana base, deal with their creature lands, turn your now mountain (thanks, Blood Moon) back into an Island and it replaces itself.

Torpor Orb is there because if you have someone playing Soul Sisters, it can be a little rough, and turning off their life gain will do nothing benefit you in the long run, I mulligan aggressively when I'm faced off versus my local Soul Sisters player to find this card and shut off their game plan. Elixir of Immortality is another good card in this match up, in that it can catch you up on life and help you keep drawing gas so you can in fact chain together enough spells to kill them from the 50 life point total.

Overall Jeskai Ascendancy is great, Fatestitcher is great, and the deck is great! I'm going to keep on combo'ing and making fatty Fatestitchers for as long as I can!

That's all I have this week folks, thanks for listening to me ramble about my pet deck, and not a new wallet friendly Budget Brew, but I promise to have something special for you next week.