Musings of the Madman - Illuminating Modern

Welcome back all! Have you ever wanted to remove playing Magic: the Gathering from the opponent’s equation? Read on then! This week I’ll be dipping my toes into the Modern arena. I haven’t been a huge constructed player in the past little while, what with Extended rotating out and with my not having many decent staples and all. I did dip my toes into Standard when Khans of Tarkir was around, but that petered out after a few weeks. MTGSalvation’s trove of Modern information hooked me on the format, and one particular niche deck sealed the deal.

Behold the Lantern of Insight! 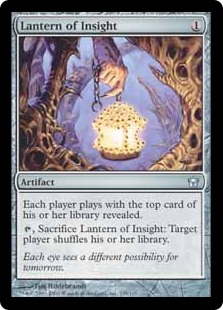 Pioneered by Zak Elsik (shadowgripper on MTGS) and Randall Thompson (thnkr on MTGS), the associated in-depth thread is here. Lantern of Insight reveals the top card of an opponent’s library, allowing Codex Shredder and Ghoulcaller’s Bell to essentially “blank” an opponent’s draw step. You are, for all intents and purposes, stopping them from playing Magic without any blue spells! Super fun!

What is the deck’s primary purpose?

As stated previously, you want to get a Lantern of Insight and a mill rock out early, and slowly grind out your opponent. Ideally, you’ll also have an Ensnaring Bridge to completely blank their combat step. Since 95% of your deck is in the one mana range (only Abrupt Decay and Spellskite cost two) and you are running Mox Opal as well, you can easily empty your hand by turn three, setting up a prison state where your opponent must deal with multiple problems or simply die to deck death.

What are the deck’s strengths?

It runs very few creatures, with Spellskite being the major one. Some decks have even forsaken this and gone “Hellbent Red” by throwing Galvanic Blast and other burn, hiding behind the Bridge and winning through a combination of Attrition and damage. The list I’ll be showing is a standard one without many tricks.

Lantern Control’s resilience is astounding. If they blow up the lantern you can simply shuffle a library, if they eliminate a mill rock they can be returned via Academy Ruins or Codex Shredder and the added ability to manipulate your opponent’s draws makes the deck quite solid.

What are the deck’s weaknesses?

Burn, burn, burn. I haven’t had a chance to test against the new Eldrazipocalypse, but it looks like the blue-red versions are more manageable than the colourless plus black versions. Chalice of the Void is not a concern. You run Abrupt Decay and if you have an Ensnaring Bridge out you just shrug and let your stuff get countered, emptying your hand.

Additionally, the deck intersects with Affinity in absorbing nuclear levels of artifact hate. Thankfully you can deal with this through some sideboard options, such as Welding Jar, or using Abrupt Decay to remove permanent-based options like Stony Silence or Kataki, War’s Wage. It can’t do much against a dedicated combo deck outside of hoping Pithing Needle can stop it, as with Lightning Storm for example.

Player decisions are a weakness as well. Since you need to be extremely aware of your opponent’s deck and its contents, a hasty mill can doom you. Miscalling a Pithing Needle target has happened to me more than once and I’ve paid for it dearly. Don’t forget that 0-power creatures such as Ornithopter do exist in the format and can be brought to bear with Cranial Plating or with Kessig Wolf Run (with Birds of Paradise) in other cases.

How does it play out?

You will be hated. Darth Vader levels of hate. People will see you and treat you as if plague-ridden. It’s a nice side benefit and the deck plays out quite well. Early on you want to play a Lantern and some mill rocks and start chipping away either at key spells or lands. Speaking of lands, Pithing Needle is incredibly key against fetchlands. Naming Scalding Tarn early on can cripple someone’s mana development. Turning off Wolf Run is often vital. Once you land a Bridge you are in the “safe zone” where all you need to do is mill an opponent’s threats. Important note about the Needle: they must activate abilities while it is on the stack. Once it enters the battlefield, it’s too late. Shuffling their deck is great counterplay. For example, if you are out of mills for the turn, sacrifice a Lantern to make them shuffle away an egregious card, or Ghost Quarter any land of theirs for the same purpose.

While I haven’t physically played against the new Eldrazi decks, various other Lantern players have and the Bridge is your most important card here. If it gets exiled by them you are likely facing an extremely uphill battle. The deck has done well against Bogles, Merfolk, Zoo, Affinity and more poorly against burn heavy decks. Its consistency is its greatest strength, and the focus required to play properly one of its greatest detriments.

Sure! Here’s the build I am using at the moment, but sideboard is meta-dependent. Adjust as you will! Also, for additional annoyance, have Kim Mitchell’s “Patio Lanterns” blaring on your phone while you play.

There we are. As you see, some of the deck pieces can be ported in from Affinity or other decks, so if you get tired of smashing with little robots, grab a lantern to illuminate their failure!

Until next week, may your choices lead others to sure defeat.