Welcome back to the Daily Dose, as we enter into a brand new spoiler season for Eldritch Moon! Last time we were deep into the throws of madness brought by the return to the Innistrad plane. Jace was trying to find answers to what was causing the Madness that was taking over the land. We thought that Avacyn was the cause of the madness, but we are learning that is not the case. It has been long rumoured that a certain large Eldrazi would be making its return in Eldritch Moon and low and behold Emrakul has resurfaced as the cause of all of the Madness swirling around Innistrad.

Here is a look at Emrakul, the Promised End. 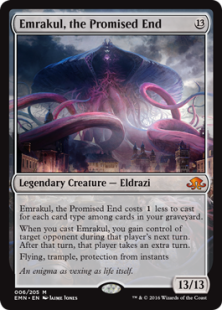 Now the first thing most people think about, is to compare Emrakul to its previous iteration, but I’m not so quick to do that. Let’s have a look at Emrakul, the Promised End just by itself.

With this iteration you get a 13/13 Flying, Trample creature. Some pretty impressive stats just right there. Emrakul has a 13 casting cost, but thanks to its first ability you have the ability to cast it for much less. With seven different card types, there is a chance you will be able to cast Emrakul for only six mana. Immediately the deck that comes to mind is a Green/Black Delirium ramp deck. With graveyard fillers like Mindwrack Demon, Crawling Sensation, Fork in the Road, and Gather the Pack, you will be able to achieve Delirium and allow yourself to cast Emrakul for a reduced cost.

The next thing you’ll notice compared to the previous Emrakul, is that this one will be able to stay in your graveyard. Why is this so great? Because reanimation spells, of course! This time you will be able to bring Emrakul, the Promised End back from the dead on to the battlefield to cause some panic on your opponents face. Like all of the other recent Eldrazi though, you won’t be getting an enters the battlefield trigger when you reanimate Emrakul.

But, wait there’s more Eldrazi to come! With Emrakul being the sixth card in the set, that means there will be at least five if not more colourless cards coming in Eldritch Moon. Many of these are looking to be more Eldrazi adding to the madness in Innistrad. There is also a good chance of their being more Devoid cards coming in the set as well. If more Devoid cards come our way it means, there will be a lot of cards from the Battle for Zendikar block that will start to see more play and become more valuable when it comes to Standard. Which cards will emerge as powerhouses, only time will tell. Well, more wonderful preview cards will help as well.

Thanks again for reading the first of many Eldritch Moon previews coming the next couple of weeks. I can’t wait to see what unfolds in Innistrad. Let me know what you are looking forward to most from the new set!