The Modern Rogue Report - Owling Mine!

Hey everyone, welcome back for the 14th instalment of The Modern Rogue Report!

I'm Cody, and this week I'm Time Warp-ing back to look at a goofy Modern deck that can be really annoying to play against! My inspiration for taking a look back is a player in Niagara Falls, Ontario who managed to play this last weekend and land himself in the Top 8 of an Invitational Qualifier. Thanks to Sam G. for the fun ride, it was great watching this on stream!

This week's deck is definitely a hoot (someone was bound to say it), and can apparently keep up in the current Modern landscape. The idea is pretty simple, draw a lot of cards and bounce permanents. Disrupting your opponent's strategy is the name of the game here, so a good grasp on the Modern format will come in handy. From this point, the idea is to stick a Fevered Visions and/or Ebony Owl Netsuke to start pressuring the opponent's life total. A combination of Fevered Visions, Temple Bell and Howling Mine all help by stocking cards up in hand and punishing the opponent for reaping the same benefit. This deck basically eliminates the downside to those three draw engines and turns it into a focal-point positive. 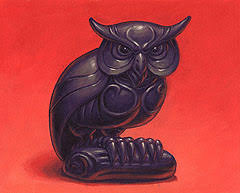 Let's take a look at an average Netsuke build from 2016:

What could be more fun than bouncing your opponent's lands to their hand?

Don't get me wrong, Ponza is a really cool deck but Stone Rain is a hard three mana. Eye of Nowhere and Boomerang (while only temporary) are only two mana, and can bounce any permanent! Time Warp helps propel ourselves into later turns than our opponent while we're also ahead on resources from early game bouncing. Casting the card Exhaustion also feels fantastic against basically any deck. Let's do the Time Warp, AGAIN! 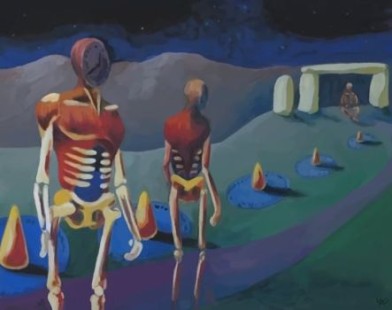 Twincast is kind of cute but could probably be replaced by just about anything. Maybe something like a Wipe Away or Echoing Truth?

Apart from the Ebony Owl Netsuke and Fevered Visions pressuring our opponent's life total, there's also Runeflare Trap. It's a nice little compact burn spell, getting cast for one red mana (casually cheated down from it's original six mana) if all things go properly. The only condition is that your opponent has to draw three cards in a turn. That's nice and in-line with our plan, so no sweat there. Get seven'd on end step after drawing from Fevered Visions, bro. It also kind of helps that the game itself forces our opponent to draw 1/3 of those cards in a turn. 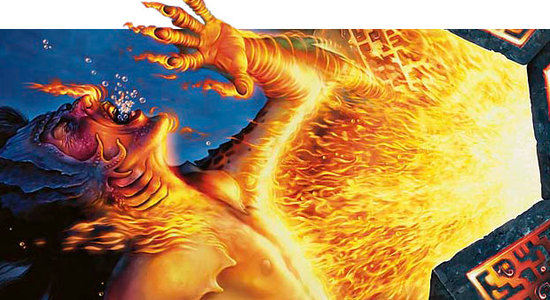 You don't really make a lot of friends in Magic by playing a deck like this, but sometimes you just have to be that person. A garbage-eating grin on face is essential while playing this deck, as you're sure to be the only person having fun in the immediate vicinity.

All jokes aside, this deck has a very straight forward game plan that some decks have an amazingly hard time overcoming. Imagine an Owling Mine player on the play vs. Tron. It's going to be incredibly hard for the Tron player to assemble Tron lands at all unless the Owling Mine player stumbles. Sure, the Owling Mine player will probably want to be conservative with the amount of cards they allow/force you to draw, but that's another thing.

The lands in this list are not optimal but hey, we're playing Owling Mine, man. Relax. This is a fun week. I'm sure any reasonable configuration of Scalding Tarns and Steam Vents will be fine, but I wouldn't go out of my way to get them. 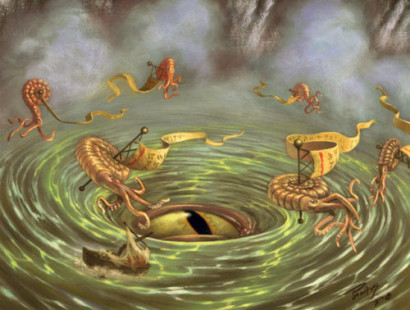 Other builds of this deck that I have seen or tried:

Considering the recent return of Jace, the Mind Sculptor, I'm pretty down with trying him out in this deck. What a plan B! I'll try Jace in any deck. 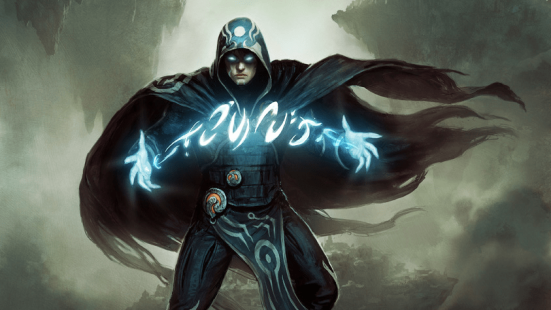 This deck is essentially reverse 8-Rack, but remember: if the opponent doesn't get to play the game, it's not very fun. We all started playing Magic because it's fun, so maybe don't pull this one out TOO often?

The games you win are usually absolute blowouts, but in the games you lose - you basically end up doing nothing and feeding the opponent extra cards.

Have any suggestions?
What could be a cool addition to Owling Mine?
Have a horror-story about playing against this?

Let me know below; and don't be afraid to like/share/comment! I really appreciate it!

It's been a slice as usual, and maybe we'll try to get a little bit more serious next week. There's a scrumptious variety of decks going around in Modern these days, so I'm sure I'll find something juicy and ripe for the picking.

Thanks again for stopping by, and cheers!